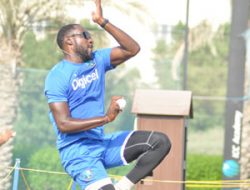 West Indies will barely have recovered from the high of a record-breaking win in the first ODI against Pakistan when they go at it again in the second game on Sunday. It had looked every inch the average game you would expect against a depleted West Indies side before lesser-known Jason Mohammed dismantled Pakistan’s fabled fast-bowling attack, sealing a chase of 309 with an over to spare. As a result, they prepare for the second game in the knowledge that they have the opportunity to wrap up a long-awaited series win against a top side.

Pakistan’s shock at losing the first ODI was written large across each of their faces, none more so than captain Sarfraz Ahmed, who seemed to run out of ideas and composure in equal measure as Mohammed began his brutal onslaught in the last ten overs. His leadership will be tested right away, as he faces the responsibility of lifting his team after a morale-sapping defeat.

There was much scrutiny on the pace of Pakistan’s innings during the middle overs, especially the sluggish way Mohammad Hafeez went about his innings, even though he did make up for it in the closing overs. However, Mickey Arthur also made plain his disappointment at the bowlers not being able to execute their plans at the back end. While there may be plenty of soul-searching for the visitors to do, they don’t have much time to do it.

Chadwick Walton was chosen ahead of Kraigg Brathwaite because West Indies coach Stuart Law felt he could take better advantage of the first Powerplay. But Walton’s ODI strike rate of 52.17 and average of 4.80 suggest Law’s faith stems from what he may have seen in practice or domestic cricket. While six ODIs isn’t a large sample size, those numbers are desperately disappointing by any standards, especially for an opener. As such, he may already be feeling the pressure to justify his coach’s faith, particularly if he is to make a case for inclusion in the upcoming Tests, a format where his average reads an even more forlorn 3.25 in four innings.

No one splits opinion in Pakistan quite like Wahab Riaz, a true specimen of raw Pakistani fast bowling in all his bouncer-bowling, reverse-swinging, toe-crushing glory. But the other side of the left-armer is becoming impossible to ignore too. He has days – too many to be mentioned in the same breath as true fast bowling greats – when he is wildly inaccurate, struggles to keep his foot the right side of the crease or away from the danger zone down the middle of the pitch. With the criticism growing all the time, Wahab’s career may be at a crossroads and the upcoming months, starting with Sunday, could shape the mercurial cricketer’s future.

The result on Friday papered over what was a largely insipid performance from West Indies with both bat and ball for much of the contest, but the feel-good factor the win generated might tempt them to stick with the same eleven.

Pakistan have more pressing selection quandaries than the hosts. Hafeez top-scored, but didn’t seem to convince many, even if his contribution with the ball should see him retain his place. Mohammad Amir and Wahab were both poor at the death, and Junaid Khan could get his chance at the expense of one of them.

The newly-laid surface at the Providence Stadium played much better than its predecessor had established a reputation for. A mockery was made of the wisdom that a low-scoring series was expected, as the ground record for an ODI innings was broken twice in four hours. Going purely off the first game, fans can expect another run-fest. Some cloud cover is expected, but rain is unlikely.

“The team morale is really good. The boys believe in sticking together and being a family. We have to come back even stronger on Sunday. We can’t rest on the victory. The important thing is to close out the series.”
West Indies bowler Ashley Nurse