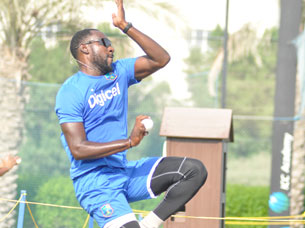 10th April 2017 Comments Off on Dedication and Discipline Views: 1507 News

The live wire seam bowler came away as one of the main performers as the home side under-performed in the four-match T20 series, losing 3-1. He had returns of four wickets for 78 runs off 13 overs in the four matches. He was also effervescent in the outfield.

“It was a pretty good series for me. It was a blessing for me to be given another opportunity to represent the West Indies and I tried to give it my all,” the Vincentian said.“I made my debut against Pakistan overseas (in United Arab Emirates) last year, so this was my first time wearing the maroon at home. “I’m all about energy. I’m a very energetic person on and off the field and I just carry that sort of spirit with me everywhere I go. Playing for West Indies was always my dream and I’m thrilled to get the opportunity to wear the maroon.

“There were times during the series where I did well, but there is room for improvement.”

The 27-year-old played in every game of the recent series, bowling with great skill and proving economical, to emerge as one of the Windies leading seamers. He said though the playing surfaces were difficult for faster bowlers, his positive approach had earned him success. “The series was a test for me, the pitches weren’t always conducive to fast bowling, but I gave it my best shot and I enjoyed it,” he explained.

“When I enjoy the game I do a lot better. A lot of people don’t traditionally see fast bowlers as top-class fielders but I try to give it my all and maximize my time on the field. My ambition is to become an all-round good cricketer and contribute in every department.”

Williams has determinedly battled his way onto the international stage. He represented St Vincent and the Grenadines and Windward Islands at age group levels and briefly made appearances at the senior level. He switched to Combined Campuses and Colleges in the regional competitions and made a big breakthrough for Jamaica Tallawahs in the Caribbean Premier League T20 tournament.

“I was in and out of cricket at the regional level and then I got a call from Floyd Reifer to come and try out for the CCC team,” he recalled. “That was really a big opportunity for me and I want to thank Floyd for giving me that chance to prove myself and helping to revive my cricket. He instilled in me the belief that I could do great things in the game.”

He continued: “Then I was involved with the Tallawahs in the CPL and I got a lot of opportunities there as well. I was eager to prove my worth and I did really well in last year’s CPL, which helped the team to win. That meant a lot to me and from there I got my big break into the West Indies team.”

Williams is a member of the Coast Guard in St Vincent and credits the training there with work ethic and attention to detail. He also wants to continue the legacy of fast bowling from the territory. “St Vincent has produced some very good fast bowlers for the West Indies, going back to the days of the great man Mr Winston Davis,” he pointed out.

“We also had Cameron Cuffy, Nixon McLean and others who played at the international level … it’s part of a tradition. I was a net bowler in St Vincent when the West Indies team visited my country and I always looked to see how the seniors players were operating so I could get tips on how to go about my work. (CMC)

“I always had that dream in my head that one day I could do great things for West Indies.”