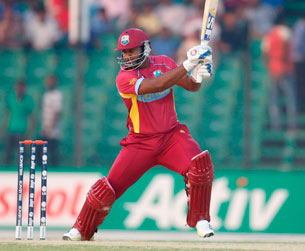 West Indies batsman Dwayne Smith has announced his retirement from all international cricket. Smith, 33, who is playing for Islamabad United in the ongoing Pakistan Super League, confirmed the decision before the start of the second qualifying final against Karachi Kings in Sharjah. His last West Indies appearance came at the 2015 World Cup.

Smith made his international debut on West Indies’ tour of South Africa 2003-04, beginning with the New Year’s Test in Cape Town in January 2004, after Marlon Samuels flew home with a knee injury. He made an impression straightaway, scoring a century on debut – a run-a-ball unbeaten 105, his only international century – in the second innings of the game, to help West Indies draw the match and end their streak of seven successive Test losses in South Africa. The team, however, did lose the series 3-1. Smith played only nine more Tests, scoring a total of 320 runs in the format. His last Test appearance for West Indies was in March 2006, against New Zealand in Napier.

Smith had a far more substantial run in the limited-overs sides, where he also made useful contributions with his medium-pace, although his batting returns remained modest. Having begun in the lower order, Smith was promoted to the top order, including as an opener, after 2014 and did better there. Six of his eight ODI fifties came when he batted in the top three, and his average of 25.27 was better than his overall career average of 18.57. Overall, he played 105 ODIs scoring 1560 runs at a strike rate of 92.69. He also took 61 wickets in ODIs, with a career-best of 5 for 45 and three four-fors.

Smith was part of two World Cup squads for West Indies in 2007 and in 2015, where his final appearance came against UAE in Napier. Following West Indies’ early exit from the 2007 World Cup, Smith spent close to three years out of the ODI and T20I squads before making his return in 2010.