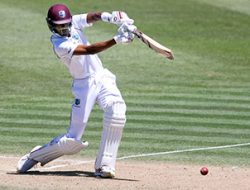 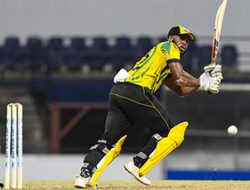 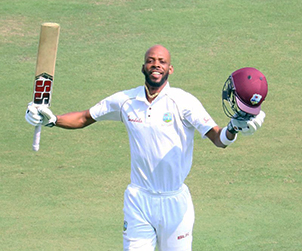 HYDERABAD, India – Roston Chase completed his fourth Test century in the second over of play on Day two of the second Test versus India in Hyderabad but the WINDIES lost the last three wickets cheaply to be all out for 311.

Devendra Bishoo was the first WINDIES wicket to fall on the resumption of play, when he chucked one onto his wicket from Umesh Yadav for 2. Jomel Warrican joined Chase in the middle and it didn’t take Chase long to complete his second Test century against India. He got an easy two runs to take him to triple figures. Six runs later and Yadav slipped one between bat and pad to rattle Chase’s stumps. Shannon Gabriel got a first ball duck when Yadav got him to edge behind.

Prithvi Shaw looked intent on attacking the WINDIES bowlers and did just that. His opening partner KL Rahul was the first wicket to fall when Jason Holder got him to play on to his stumps for 4. Shaw continued to make the WINDIES pacers look meek, taking a particular liking to Shannon Gabriel. Cheteshwar Pujara joined Shaw and the pair looked to replicate their partnership from the first Test in Rajkot. However, it was not to be as Shannon Gabriel had Pujara caught by Hamilton for 10.

The WINDIES had an injury scare when wicketkeeper Shane Dowrich had to be carried off the field after being struck on the knee from a delivery. Hospital scans showed no damage but the effects of being hit from a 90mph delivery. He took no further part in the day’s play, with substitute Jahmar Hamilton taking up wicketkeeping duties.

Indian Captain Virat Kohli and his vice-captain Ajinkya Rahane then went about rebuilding the Indian innings to reach the WINDIES 311 total. Striking 5-fours on his way to 45, Kohli was given out LBW but reviewed the decision. DRS determined that it was the on-field Umpire’s call and the original decision stayed. India now 162-4.

Rahane was joined by Rishabh Pant and the pair regained control of the match for India, just when the WINDIES breathed a sigh of relief in the dismissal of Kohli. Rahane played his natural game of patience chipping away at the WINDIES bowlers, while Pant took a liking to Devendra Bishoo. Holder had to rotate his bowlers wisely but that still did not stop the flow of runs. Shannon Gabriel was exasperated after Hamilton dropped Pant on 24 when India were 196/4.

At the close of play on day two India are 308/4, trailing by 3 runs with 6 wickets remaining. Pant on 85 not out and Rahane on 75 not out, with a 146-run partnership. Jason Holder had the best bowling figures for the WINDIES with 2/45, while Gabriel and Warrican had 1 each.

No doubt the WINDIES will be going hard in the morning in search of those 6 remaining wickets. WINDIES first innings centurion Roston Chase said “After the first game, I really looked at my game in both innings and I thought I was trying to overhit the ball and in these quick out-fields, that’s not really called for. You just have to stroke the ball into the gaps and pick up the ones and twos and put the bad ball away…. Hopefully we get some wear and tear on the wicket to help the bowlers as the days go by because right now it’s a batters wicket.”