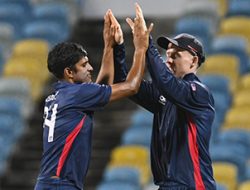 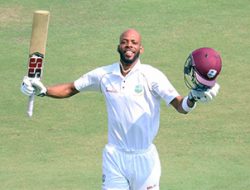 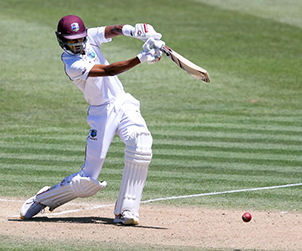 HYDERABAD, India – A patient and calculated innings from Roston Chase saw the WINDIES fight back against India on the opening day of the second Test match in Hyderabad to close on 295-7, after being 113-5.

Captain Jason Holder won the toss and elected to bat first on a pitch that promised runs to the batsmen. The opening pair of Kraigg Brathwaite and Kieran Powell looked set to attack India and get a solid foundation on the board. Powell in particular took a liking to the slower bowlers who came on early. He looked fearless against Ashwin who had to complete an over started by Shardul Thakur who left the field due to injury.

Powell survived an LBW review and just when the pair looked settled, he played a wayward shot and was caught by Kuldeep off Umesh Yadav for 22. Kuldeep then came on to take a wicket himself when he had Brathwaite trapped in front the stumps for 14. Shai Hope came to the middle and together with Shimron Hetmyer, they looked like the combination to repair the loss of two quick wickets.

Hetmyer looked fancy with some of his strokes but Hope looked classic with a cover drive amongst his five boundaries. Hope looked set to get his first big total in the 3 innings of this India tour. Umesh Yadav got one to nip back in and clip Hope’s pads and was given out. Hope reviewed but the replays showed that the on-field Umpire was correct. Hetymer was finding his groove but once again Kuldeep got the better of a WINDIES batsman, when he trapped Hetmyer LBW for 12.

Sunil Ambris also played a few strokes of his own which included 3-fours, but on 18 Kuldeep got him to play an inside-out shot and he was caught by Jadeja. Roston Chase started a slow build to his innings. Along with Shane Dowrich, the partnership looked to rebuild the WINDIES innings after the rapid loss of 5 wickets. The pair, knowing each other’s batting styles, rotated the strike nicely, dispatching the bad deliveries when available. They shared a 69-run partnership until Dowrich became another victim of Kuldeep for 30, which included 4-fours and a six.

Chase was joined by Captain Jason Holder and they continued on where Dowrich fell. Holder started slowly, giving Chase free flow to continue the scoring. However, the skipper then got into his own. The pair frustrated the Indian bowlers, forcing Virat Kohli to rotate his unsettled bowlers. Chase and Holder chipped away at getting runs, quick singles and boundaries where available saw both men reach half-centuries. With the score on 286 and a partnership if 104, India took the second new ball in the hopes of breaking this partnership. Umesh Yadav did just that when he got Holder caught behind from a thin edge for a well-crafted 52. This 100-plus run partnership between Roston Chase and Jason Holder saw them become the first pair with three century partnerships for the seventh wicket in Test cricket.

Chase was joined by Bishoo and they safely navigated the remaining time and new ball until the close of play, with the WINDIES on 295/7. Play continues at 9:30am on Saturday with Chase starting the day needing 2 more runs for his fourth Test ton.

WINDIES Head Coach Stuart Law was pleased with the team’s fighting spirit saying, “To fight back from 113-5 to finish on 295-7 was good to see. Roston Chase, Shane Dowrich and Jason Holder dug deep to enable us to finish the day just short of 300. Chase was outstanding finishing on 98no and has the opportunity to complete a well-deserved century tomorrow.”