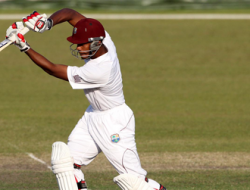 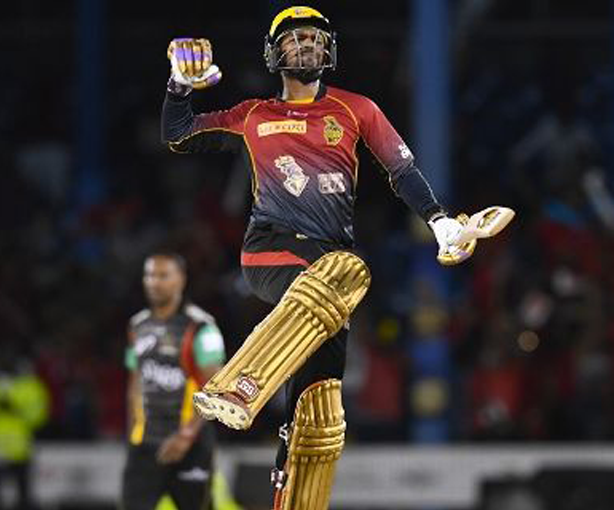 Trinbago Knight Riders orchestrated a stunning come-from-behind win, courtesy Denesh Ramdin‘s rampant 35-ball 59 not out, to pick up a four-wicket win over St Kitts and Nevis Patriots in a match befitting a top-of-the-table clash.

On a pitch that got seemingly slower as the game progressed, Ramdin struck at nearly 170 to pull his team out of the depths of 89 for 5 and seal a chase of 159 with three balls to spare in Port of Spain.

With dew setting in, Patriots’ bowlers proved cardinally erratic in the final stretch, leaking 72 runs in the last 5.3 overs, after their batsmen had given them what had seemed like a defendable total.

Like Knight Riders, Patriots, too, struggled early on after being asked to make first use of the Queen’s Park Oval surface. But Shamarh Brooks‘ 37 upfront, followed by contributions from Jonathan Carter, Carlos Brathwaite and Mohammad Nabi allowed them to finish on 158 for 7.

Knight Riders’ win was their fifth in six matches, and enabled them to charge into the knockouts of the 2017 Caribbean Premier League – the first team to do so.

Anderson Phillip hardly created a favourable first impression in his first match of the season. Entrusted with the new ball, a nine-delivery first over that featured three wides, one of which snuck away to fine leg, set the tone for a clumsy night on the field. It was enough to take him out of the attack and bring on Sunil Narine, but Phillip would mess up nonetheless. Chris Gayle had got down to sweep, but Narine’s guile took the ball away, forcing him to fetch the shot. The result was a top edge that lobbed to square leg, where Phillip ran back and dived but couldn’t hold on. Narine, though, bounced back immediately to find Gayle’s outside edge next ball, with one that ripped away from a length and was caught at first slip.

If the first chance had been tough, Phillip had no such consolation when in the next over, he put down a straightforward catch at short fine, letting off Brooks. He was brought back to bowl next over and just seemed to be getting his act together with a tight seven-run over, but 11 runs off his next would mean he wouldn’t be used for his full quota.

Unlike Gayle, Brooks wouldn’t let the reprieve go completely unpunished. Patriots consistently lost wickets and the scoring rate never really threatened to soar past the six-an-over mark. But Brooks adapted to the slowness of the surface by keeping the strike ticking with 12 singles, two twos and a three.

Brooks had quietly moved to 24 at a run-a-ball when Shadab Khan came on to bowl the 10th over. With King having already struck the first ball for six, Brooks cut Shadab to deep point for three, before depositing him over long-on with a slog to make it 21 for the over and trigger the first change in momentum.

Narine dismissed King first ball after the drinks break, and had two in two, having ended his first over with the wicket of Gayle. Jonathan Carter reverse-swept the hat-trick ball but was pinged on the pad. In the excitement of the moment, wicketkeeper Ramdin seemed to have missed the fact that the ball had grazed the glove before going on to the pad and lobbing in the air, and ignored a catch. The moment set up Patriots’ end-overs surge, with Carter making a valuable 31 off 26 balls. He lost the company of a set Brooks in the 14th over, but with Carlos Brathwaite and Mohammad Nabi sustaining the surge with rapid cameos, Patriots punched 49 runs in the last five overs.

With the ball sticking in the pitch, Knight Riders lost three wickets inside seven overs with just 42 on the board, each of them getting out to extravagant strokes. It was only when Ramdin joined Colin Munro at the crease that the first signs of stability emerged. Munro struck a valuable 36, off 30 balls, and helped add 30 for the fourth wicket with Ramdin. But in the context of the chase, the recovery had been scant. When Shadab tried to force a cut against Samuel Badree and lost his off-stump, Knight Riders had lost half their side and needed 70 off 37.

Ramdin then decided to counterattack and it made for clean striking. Shamsi fed to Ramdin’s strengths by pitching it up within his swinging arc and Ramdin responded by clubbing two sixes in the 15th over which yielded 16 runs. Hasan Ali followed up with a four-run 16th over, but things went progressively worse from there, with the next three overs going for 12, 16 and 19.

The run out of Dwayne Bravo, who had been a willing partner with 20 off 12 gave Patriots some hope, but Ramdin nervelessly killed it. In his final assessment, Patriots captain Gayle may rue his decision to not bowl out Nabi (2 for 12 in three) and Badree (2 for 14 in two), while Brathwaite was persisted with for all four overs in which he gave away 44.