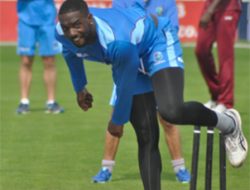 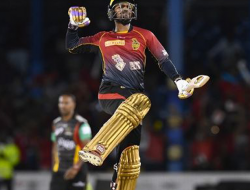 DERBY, England: West Indies batted outstandingly in the game, declaring in both innings for 427 for three and 327 for six respectively. They also bowled well to bundle out the hosts for 181 in their first innings.

Powell, one of four batsmen to score hundreds in the encounter, said it had been important for the touring batsmen to spend time at the crease, especially against the pink ball.

“Obviously it was valuable match time in the middle,” said Powell, who also struck 92 in the first innings.

“All the batters had the opportunity to spend some good time, see what the pink ball does, see how it operates in these conditions – obviously it’s going to be a bit different than in the Caribbean.”

He added: “It was interesting. In the first innings the ball didn’t swing and in the second innings it did a bit so I guess at different points in the game the ball will react differently so I’m not sure how much to read into that, if the conditions at Edgbaston will be similar to here.

“I guess it’s just something for us to know in the back of our minds that these things can possibly happen but we still have to go in with an open mind.”

West Indies have had a strong start to the tour with solid outings against Essex at Chelmsford and against Kent in Canterbury, with the likes of Roston Chase, Shai Hope and Jermaine Blackwood gathering half-centuries.

Against Derbyshire, Chase, Shai Hope and his older brother Kyle Hope, struck hundreds in the first innings, with Powell carving out a glittering century on Sunday in the second innings.

Powell, one of just three members of the 15-man squad to have played a Test in England before, said the focus of the batting unit was on compiling three figure scores.

“Obviously as a batting group we’ve talked about some of the things we’d like to achieve … and getting centuries is one of those,” Powell explained.

“In the second innings I got a century, in the first innings you had three guys getting centuries and as I said, all valuable experience in the middle. Hopefully the guys can retain the information, retain the processes that they put in place and what worked for them and take it into the series and I’m sure once we do that, we’ll be in good stead as well.”