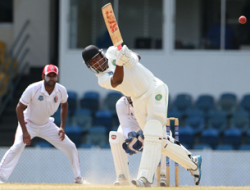 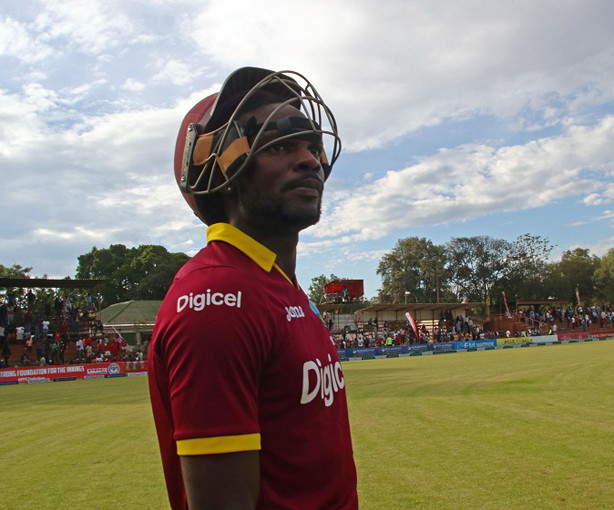 With West Indies needing four off the last over in Bulawayo, Donald Tiripano cunningly gave away just three runs and denied Jason Holder off the last ball to seal the 34th tie in 3806 ODIs.

West Indies were comfortable at 220 for 2 in the 45th over in a chase of 258, but from the moment Shai Hope edged behind for 101 they lost six wickets for 37 runs. The equation ultimately boiled down to to the last ball: West Indies needed one. It boiled down to one man v the other: Tiripano v Holder. Coach Heath Streak was on his feet. Bulawayo was on its feet. Tiripano flicked out a full slower ball, wider than a set of stumps outside off; it was tantalisingly close to the tramline. Holder threw his hands at a drive, but couldn’t reach the ball. Both Holder and Jonathan Carter, from the non-striker’s end, scampered off for a bye. Wicketkeeper PJ Moor, who had come under the scanner for several missed chances in the Test series, kept his head, took his time, and nailed the stumps at the striker’s end with an accurate under-arm throw. Tiripano set off on a celebratory sprint and left Bulawayo bouncing in utter delight.

Zimbabwe’s three front-line bowlers – Chris Mpofu, Tendai Chisoro and Graeme Cremer – and left-arm spinning allrounder Sean Williams had bowled out. It left Cremer with two options for the final over: seamer Tiripano and part-time offspinner Sikandar Raza. Raza had leaked 25 runs in four overs, and Cremer turned to Tiripano, who had not bowled since the 10th over.

Tiripano’s first ball – full and outside off – was drilled to sweeper cover. Carlos Brathwaite then swung wildly at a legcutter and dragged a catch to long-on. The third ball was more dramatic: Holder drove a full delivery straight back at Tiripano who deflected it onto the stumps at the non-striker’s end with an outstretched right hand to catch Ashley Nurse, who had backed up a fair way, short for a duck without facing a ball. When Holder snuck in a leg-bye off the fourth, West Indies were left needing 2 off 2. Carter swatted at a short legcutter, and Chamu Chibhabha nearly pulled off a sensational grab, diving forward from deep square leg. The single meant the visitors levelled the scores. Tiripano then trumped Holder to cap an unlikely turnaround.

Having opted to bat, Zimbabwe had lost their last eight wickets for 67 runs, and just about managed to last 50 overs for the first time in eight attempts in ODIs in 2016. Their fielding was worse than their batting implosion. Tiripano gave Hope his first life on 59 when he trod on the long-on rope while pouching an over-head catch. Three overs later, Raza reprieved Hope on 69 by shelling a regulation waist-high catch at short extra cover. Raza’s day turned into a nightmare when he ran back from the same position and dropped the same batsman in the 39th over.

Zimbabwe’s lack of awareness in the field came to the fore when Williams was called out for a no-ball at the start of the 40th over, as Cremer had five men inside the ring. Kraigg Brathwaite had a slice of luck on his own, on 45, when he gloved a sweep. The ball grazed the base of the leg stump and the bails refused to budge.

Hope, playing his second ODI, pressed on to raise a maiden century when he shovelled Mpofu past midwicket. In the process, Hope became the joint second-quickest, along with Roy Fredricks and Travis Dowlin, to make a maiden hundred for West Indies in ODIs. Desmond Haynes was the quickest, scoring 148 on debut against Australia in 1978.

After having brought up his maiden half-century, Kraigg Brathwaite picked out long-off three overs later. Three balls later, Williams bowled Rovman Powell with a fizzing yorker. Tiripano then ran away with the momentum.

Tiripano was earlier in the midst of the Zimbabwe implosion. He was the only batsman among the hosts’ last seven to reach double-figures.

It starkly contrasted with the attacking enterprise showed by Craig Ervine and Raza in their 144-run partnership, and the solidity showed by openers Brian Chari and Chibhabha in their 38-run opening stand.

Ervine and Raza placed the ball into the gaps with laser-guided precision. In between, there were some occasional hefty blows too. They joined forces at the start of the 14th over, and West Indies did not find a way past them until the 39th over. By then the score was nearly 200.

With variable bounce challenging the batsmen, West Indies persisted with a short extra cover even in the 32nd over, but Ervine and Raza refrained from playing across the line, especially early in their innings. Once the pitch eased out, they showcased their gallery of shots.

Ervine swept, reverse-swept and often raced down the track to throw Sulieman Benn and Nurse, who did not get much turn, off their tracks. He was the first to reach his fifty, off 62 balls. Raza then reached his milestone off 59 balls and took the lead. He pulled powerfully but arguably the most memorable shot was the wristy glide, which bisected backward point and short third man in the 35th over.

Four overs later, Raza hit a lofted drive straight into the lap of wide long-off, and the innings unravelled spectacularly with Carlos Brathwaite collecting career-best ODI figures of 4 for 48. Zimbabwe, however, came away smiling in the end and ensured that the tri-series was no two-horse race.