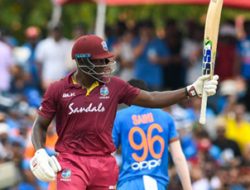 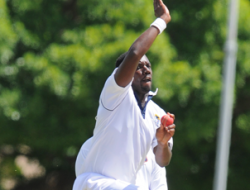 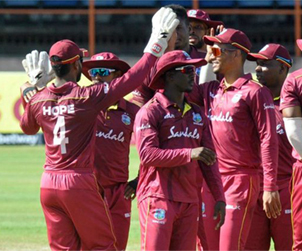 The left handed Lewis made 102 – his third ton in this format as the home side powered to their revised target of 197 to win with 64 balls to spare at the Grenada National Stadium.

Earlier in the series Lewis made 99 not out in Barbados so Sunday’s Man of the Match performance made amends for the near-miss century in last Tuesday’s victory.

He ended the series with 208 runs in three innings to capture the Player of the Series award.

Earlier Walsh grabbed 4-36 off his 10 overs to rip the heart out of the Ireland middle order. He extracted generous turn from the slow surface and was the perfect fillip after fast bowler Oshane Thomas rocked the top order with a fiery spell of 3-41.

“I’m very pleased with the overall performance. We ticked all the boxes we wanted to and we played a good allround game today,” Captain Kieron Pollard told reporters after the match. “We came into the series liking to win 3-0 and we finished the job on a high. It was a hard-fought series, so credit to the team for the way they went about business and took care of business.”