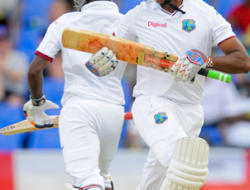 West Indies bowlers fought back impressively to bowl England out for 399, dismissing the last five batsmen for 58 runs in the morning session but closed the day on 155 for four and in need of a big innings from veteran Shivnarine Chanderpaul to stay in contention in the first Test here on day two in Antigua.

They resume today’s third day with Chanderpaul (29) and rookie middle order batsman Jermaine Blackwood (30), looking to continue their consolidation, having added 56 for the fifth wicket to rescue them from an unhealthy 99-4.

Anderson, celebrating his 100th cap, had West Indies Devon Smith caught behind to move to 381 wickets, just two short of the mark set by Botham 23 years ago.

With the new ball proving receptive to Anderson’s swing, his coronation looked sure to come sooner rather than later, but despite 13 overs of pressing and prompting he could not add to the dismissal of Smith.

The 32-year-old, whose mastery of the moving ball has already taken him past the likes of Bob Willis and Fred Trueman, will be a worthy heir to Botham when the moment comes.

He can expect first bite at the cherry today, when the hosts will resume.

But their top-order lacked a major contribution as Chris Jordan, Stuart Broad and James Tredwell each joined Anderson in the wickets column.

Ben Stokes might have made it a full house for the bowling attack, and turned events decisively in England’s favour, but was called for a no-ball after having Blackwood caught at slip.

England’s innings had ended with unexpected haste, but not before number 11 Anderson had chipped in with 20 runs in boundaries.

It was an entertaining cameo but his real job began when he led the team on to the field, in honour of his milestone appearance.

He immediately got the ball moving, darting a vicious inswinger into the toe of Kraigg Brathwaite’s bat and beating Smith with a beauty.

Anderson continued after the interval and chalked up number 381 with a delivery that was simply too good for Smith, whose average of 24 does him no injustice.

There was a stifled appeal for caught behind and a rejected lbw claim but no further wickets in a seven-over burst that cost just nine runs.

Instead Jordan, a marginal pick ahead of Liam Plunkett and Mark Wood, picked up England’s second.

Bowling at good pace he had Darren Bravo in two minds outside off stump, with a late withdrawal of the bat handing Buttler a second catch.

Brathwaite and Marlon Samuels showed greater resolve, occupying 15 overs either side of tea.

With the hardness wearing off the ball and little to assist Tredwell’s spin, England needed to force the issue to stay on top. Broad did just that in his tenth over.

After rearing one into Samuels at 88mph, he took the pace off his next delivery and had it straighten off the seam.

Samuels, on 33, obliged with the nick and the reaction of bowling coach Ottis Gibson suggested it was plan hatched in the meeting room.

Gibson, of course, previously worked as the Windies’ head coach and worked extensively with Samuels.

Broad also had an idea for Chanderpaul, going round the wicket first up and spearing a short ball at the left-hander.

It was a rough welcome to the crease but sailed through a gap in the cordon for four.

West Indies slipped to 99 for four when Brathwaite went for 39, though it took something special.

Tredwell was the bowler, and owed his first Test wicket in five years to Jordan, who darted low to his right to take a stunning one-handed slip catch.

Chanderpaul and Blackwood went on to add an unbroken 56, with the latter reprieved on 21 when Stokes overstepped.

The day started with West Indies bowling coach Curtly Ambrose giving his charges an impassioned on-field pep talk—the Caribbean great wagging his finger and pumping his fist as he talked.

His words had the desired effect as the pace trio of Jerome Taylor, Kemar Roach and Jason Holder banished their lacklustre showing on the first evening and knocked England over before lunch.

Stokes was the first to fall, adding just eight to his overnight 71, before steering Taylor to gully.

Stokes looked furious but it remained his second highest Test score and underlined his exceptional potential at number six.

It was the first of four wickets for four runs as Holder accounted for Tredwell and Roach removed Buttler and Broad for ducks.

Buttler was unusually passive in his 22-ball stay, while Broad’s tame exit continued a worrying downward trend in his batting.

Anderson was last man out, his dismissal at the hands of Samuels proving he at least has no designs on Botham’s 14 Test centuries.