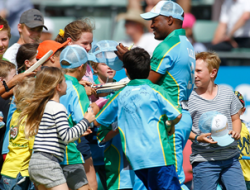 18th February 2015 Comments Off on WI regroup ahead of Pakistan clash Views: 1557 News

The West Indies team, seeking to regroup following their opening round thrashing at the hands of minnows Ireland in the ICC Cricket World Cup, arrived in Christchurch yesterday for their second round clash against Pakistan which will be played on Saturday, at Hagley Oval.

Captain Jason Holder’s side, jolted by an excruciating four-wicket loss to Ireland at Nelson, will be seeking to revive their campaign when they take on the Pakistanis. West Indies have been criticised in many quarters for Monday’s defeat to Ireland and must now win matches to keep alive their chances of securing a place in the quarter-finals phase.

The Caribbean team collapsed to 87 for five before Lendl Simmons (102) and Darren Sammy (89) guided them to a total of 304 for seven against Ireland.

“The West Indies, I do not understand how they could ever think that just over 300 runs that they would just automatically win,” insisted former fast bowler Michael Holding, a member of the West Indies side that won the 1979 World Cup. “They cannot take things for granted. You should be able to think for yourself, ‘OK we got a reasonable score but we still have a fight on our hands and we still have to go out there and perform”.

West Indies will be resting today and will only resume training tomorrow at the Hagley Oval in Christchurch. They will also train on Friday ahead of the crucial clash against Pakistan, who lost to the defending World Cup champions India by 76 runs in their opening encounter at the Adelaide Oval, in Australia.