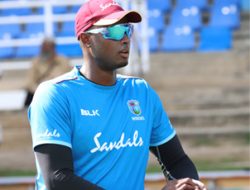 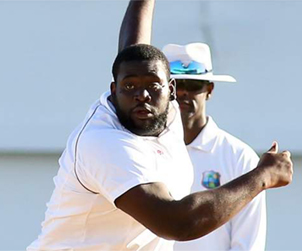 ST. JOHN’S, Antigua – Rahkeem Cornwall could make his long-awaited Test debut on home soil, when West Indies kick off their campaign in the new ICC World Test Championship against India later this month.

The interim Selection Panel of Cricket West Indies – headed by Robert Haynes – has included the Antiguan off-spinner in the 13-member squad for the MyTeam11 Series, which is co-sponsored by Skoda and KEI.

West Indies and India will play two Tests – from August 22 to 26 at the Sir Vivian Richards Cricket Ground in Cornwall’s native Antigua, and from August 30 to September 3 at Sabina Park in Jamaica.

Cornwall has been rewarded for his impressive record for Leeward Islands Hurricanes in the West Indies Championship and the West Indies “A” Team, since making his first-class debut just under five years ago.  The 26-year-old has taken 260 wickets at 23.90 apiece in 55 first-class matches and is highly regarded among his peers as one of the most effective spin bowlers in the Caribbean.

Cornwall has also proven that he is a capable middle to lower-order batsman, averaging just under 25 in 97 innings, and good enough to have one hundred and 13 half-centuries in the first-class arena.

“Rahkeem has been performing consistently over a long period of time and has proven to be a match-winner, so we believe his elevation to the Test squad is merited at this time,” said Haynes.

“We believe he can provide an attacking option to our bowling attack with his sharp turn and extra bounce. He can also lend a bit of depth to the batting, so we are looking forward to him coming into the squad and making a valuable contribution.”

The interim Selection Panel has kept faith with practically the rest of the squad that earned a sensational 2-1 series victory over England earlier this year in the Caribbean, except injured fast bowler Alzarri Joseph and left-arm spinner Jomel Warrican.

This means that regular West Indies “A” Team captain Shamarh Brooks is the only other uncapped player in the squad apart from Cornwall. All-rounder Keemo Paul, a replacement for Test captain Jason Holder when he was forced to miss the final Test of the England series, retains his place in the squad.

“Alzarri is undergoing remedial work and we are monitoring his recovery, but we do not think he is ready yet to last five days of a gruelling Test match,” Haynes said on Joseph.

“He represents a key part of West Indies future and we do not want to rush him back. We have two important series coming up later in the year in India and we want to be very careful how his recovery is managed.”

The Series gives both sides the chance to win up to 120 points – sixty points for a win – in the new ICC World Test Championship  league table. A draw will be worth twenty points with zero points for a loss. West Indies will play a further five Series with the opportunity to qualify for the ICC World Test Championship final in 2021 if they finish in the top two in the league.