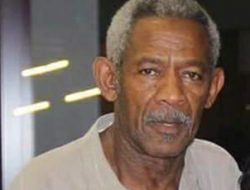 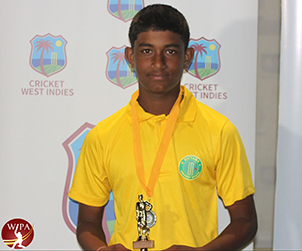 St John’s, ANTIGUA – Starting at the early age of four, Mavendra started to show his love for cricket. He visited various cricket grounds with his father, jumping at every chance he had to bat. This simple introduction appeared to be a good stimulus for the budding superstar, who over time developed a great passion for the game.

In the recently-concluded CWI Under 15 competition, where Guyana finished in 2nd place, Dindyal scored 200 runs in the five rounds of matches, which accounted for approximately 25 per cent of his team’s total scores. While he only took one wicket, in his 11.3 overs, batsmen could only score 42 runs off of him. That is an economy rate of 3.72. 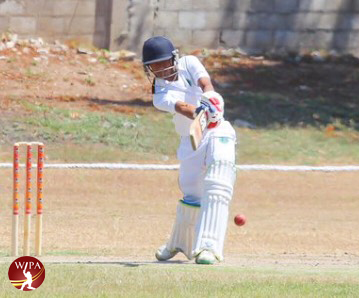 Having been identified from the age of 12, Mavendra has participated for the last 2 years in the Under-17 League playing for Diamond Secondary School, holding the top score in the Schools’ League of 97 against Friendship Secondary School.

However, such heroics were not the epitome of Mavendra’s early journey, for he had already “donned” whites for the Gandhi Youth Organization (GYO) at the tender age of 11, in the second division competition where he still has the highest score at this level of 98 against Diplomas Cricket Club. Mavendra’s early exploits enabled him to create an unusual feat of playing his first 1st Division Cricket match at the age of 12 years and ten months, when he gained selection to the GYO first team against Transport Sports Club at Everest Cricket Club ground, registering scores of 14 and 23. 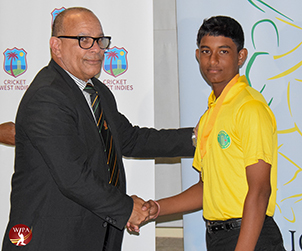 Mavendra Dindyal passes his spare time by watching comedy movies and reading novels. He likes traditional Guyanese foods such as fried rice and macaroni, and dhol (split peas) and rice with fried fish and calalloo (spinach) or bora (long beans).

This young man is certainly one to keep under close watch as he develops both as a cricketer and young man. He has the talent and mental strength to ascend the ranks of West Indies cricket.