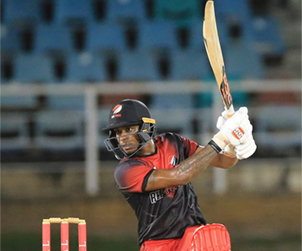 PORT OF SPAIN, Trinidad – Zone B Host Trinidad And Tobago Red Force maintained their 100 percent record in the 2019 Colonial Medical Insurance Super50, with a six-wicket win over Guyana Jaguars in a rain reduced 43 over encounter.

On Thursday, Jeremy Solozano and Darren Bravo put on 226 unbroken runs for the third wicket breaking  domestic records along the way. This time Webster and Solozano 124 run opening stand did the same, becoming the highest partnership for any wicket in Trinidad & Tobago vs Guyana List A matches.

The Previous best: 100 for the 2nd wicket by Phil Simmons and Brian Lara at Hampton Court in 1995.

Earlier, the Jaguars en route to posting a modest 187/9 batting first, rain arrived and stopped for two hours from 150 pm to 350 pm with Jaguars 11/1 after five overs.

When the match resumed, Webster ran out Jaguars player of the match versus Windward Volcanoes, Kemol Savory for nine with a direct hit to leave the Jaguars on 48/3 after 16 overs.

Guyana’s innings never had any momentum as they kept losing wickets regularly failing to cross the 200-run mark in consecutive games.

When the Red Force chase commenced, Webster who registered his 50 from 24 balls (6 fours and 3 sixes) with a straight six off left arm spinner Veerasammy Permaul, seemed to crushing to maiden list A hundred before eventually being dismissed for a shot filled 87, spoke to CWI Media and this press about his personal and team effort.

“I felt very good, the team gave me the confidence to go out there and do what I did and I’m very happy”, said Webster

He continued: “It started from the first game where I missed out. I think queens park is very good place for batting and seeing how my teammates batted, I knew could go out there and do the same thing

“My role is to go out there in the power play and give the team the best start. So after the power with fielders out, the plan was simply to rotate the strike with Jeremy (Solozano).

Webster concluded reflecting on the Red Force bowling and his goals for the remainder of Super50 2019.

“The bowlers credit to them, came out with a wet ball (after rain break) and bowled to a plan that the captain (Imran Khan) wanted us to work with.

“I was a bit disappointed not to score the hundred, but I put the team in a good position to win the game so I’m happy with that. (Before tournament) I set myself the goal of scoring a couple of hundreds and the most runs for my team.

At Brian Lara Academy: A match-winning cameo from local boy Joshua Da Silva of 62 not out and an excellent team bowling effort, propelled West Indies Emerging Players to a six-wicket victory over the United States Of America in rain reduced 20 over encounter.

“The performance of the team was very good, thought we played a good team game. Young Da Silva came in at a crucial stage and what I like about his innings is that he was composed, started rotating strike early and when he got in, started playing some good cricket shots”, said Reifer

The recent West Indies interim Head coach revealed that Da Silva was brought in as extra batting cover as a tactical change, after it was confirmed the match would be reduced to a 20 over contest.

This clearly proved to be very handy in the end as American team had brought themselves back into the game, as West Indies Emerging players were left precariously placed at 25 for 4 at one point in reply.

“What we actually did was bring in the extra batsman in Da Silva. We realized the pitch was bowler friendly and figured we could get through the (shortened) game with five bowlers and (Gidron) Pope could bowl a couple overs if necessary.

“We felt that the extra batsman would be needed on that surface and it worked out,” said Reifer.

With a win and loss from the first two games ahead of their next match versus Windward Islands Volcanoes, Reifer said the young West Indies side is taking it one game at a time and not focusing too much on the opposition.

“Obviously we are going to focus on the opposition but not too much. We will have a look at some of their main players, but we are mainly focused on continuing to play the brand of cricket we decided to play before the tournament.”

“We played on the pitch (at Brian Lara), this is two games, we know the surface well and what you are going to get from the surface and know how to play on it. So it’s just a matter of focusing on our game, areas we need to improve on and building on the strengths”, Reifer concluded.