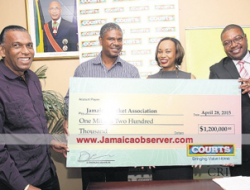 29th April 2015 Comments Off on Simmons not discouraged by Test loss Views: 1202 News

Despite his team’s loss to England on the final day of the second Test in Antigua last week, West Indies coach Phil Simmons said he was encouraged by the performance but wants to see improvement from his players in the final Test bowling off in Barbados on Friday.

Speaking to the media yesterday, Simmons revealed that Jason Holder, who injured his left ankle during the second Test in Grenada, “has recovered well.”

“It was not too bad. We will see how he goes and if he can start some bowling tomorrow (today) or Thursday,” said Simmons.

Asked if he was encouraged despite England’s nine-wicket win which gave the visitor a 1-0 lead in the three-match series, Simmons said: “Yes very much so. I think we start well, we just need to understand what happens in the middle session and the end session of a day but we have come back well.”

He said it was a bit of negligence on the final day that cost them and that the players are learning international cricket on the international stage which is not an ideal situation.

“We had two hours of what I would call negligence on the last day and we lost the Test match but that is Test cricket. You can rule for 3 1/2 days and in the next half day the Test match goes away from you. (However) I am very encouraged by what I have seen,” he explained.

He said that because of the level of first class cricket in the region, when players come up to the Test level, “the biggest thing for the young players is to understand the situation and how they have to play in those situations and that is determined by what the teams needs and the scoreboard.”

“I think they just started learning so they are enthusiastic and want to learn and then you have the four experienced guys who need to make sure their presence is felt in this Test match coming up.” “We will be trying to improve our game,” Simmons added.

“One of the biggest areas that has to change is the mindset of how long I have to bat or how I bowl in four day or Test matches. That is one of things we have to address. I don’t know how yet but as we go along we will have to find a way,” Simmons explained.

Asked what was the most starling thing he saw in the second Test, Simmons said: “The way we batting on the last morning.

“I think that has been the most startling. You are away from it and you here people taking about how bad this is but when you are in the camp it is not as bad as people say.

“There is learning to be done about the way things have to be done for us to be successful,” he said.

“I would like to see us play two or three sessions consistently…You are learning international cricket on the international stage but that is not ideal,” the Windies coach added.

He also spoke about Jerome Taylor’s recovery saying the pacer, who was ruled out of the second Test with a shoulder problem, bowled yesterday and will bowl again today but he could not confirm if the Jamaican will be fit enough for Friday’s start.