Windies Men Go After Improved Performances In ODIs And... 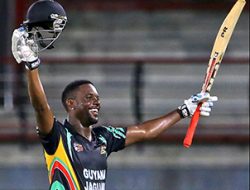 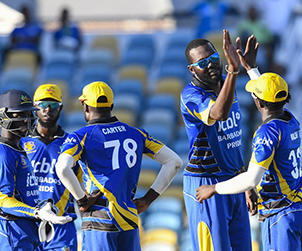 BRIDGETOWN, Barbados – Spinners Yannick Ottley and Keron Cottoy shared seven wickets to bundle out Jamaica Scorpions for their lowest total of the 2018-19 WINDIES Super50 Cup and set up a comfortable six-wicket victory for Combined Campuses & Colleges Marooners on Sunday here.

Ottley grabbed 4-11 from 7.3 overs with his uncomplicated left-arm spin, earning the Player-of-the-Match award, and Cottoy had the flattering figures of 3-3 from just two overs, as the Scorpions, entering the contest as the only unbeaten team in either group of the Tournament, were routed for 82 in 26.2 overs in the Group “B” contest.

In the other Group “B” contest: A career-best spell from all-rounder Kevin Stoute and a resolute half-century from left-hander Jonathan Carter carried Barbados Pride to a three-wicket victory over Leeward Islands Hurricanes in a tense finish.

They appeared to be coasting on 52 for one with Campbell and Blackwood untroubled during a stand of 51 for the second wicket.

The slide started, when Marooners captain Carlos Brathwaite, the WINDIES Twenty20 International captain, removed Campbell in the 12th over, Andre McCarthy was run out two overs later and Ottley bowled Blackwood in the 17th over to leave the Scorpions 59 for four.

The slide took root however, when Ottley and Cottoy snared the last six wickets for four runs in the space of just 20 balls.

The Marooners had a few bumps in their chase, but Kyle Corbin hit 43 to put them within reach of victory which they accomplished in the 18th over to fortify their hold on second place in the group.

At Kensington Oval: Carter helped to formalise the hosts’ second victory in three days with an unbeaten 79 from 118 balls spiced by five boundaries, as the Pride, chasing 227 for victory, reached their target with two balls remaining.

Requiring 11 off the final 12 deliveries, Carter and fellow left-hander Dominic Drakes scraped three runs off the first three deliveries of the penultimate over bowled by Sheldon Cottrell.

The Hurricanes left-arm fast bowler removed Drakes with his fourth delivery, but Hayden Walsh, Jr was able to scramble four runs off the final two deliveries, leaving the Pride needing four in the final over.

Jeremiah Louis was entrusted with the final over and he kept Carter scoreless from the first ball before the Pride left-arm hander scrambled a bye off the next delivery before Walsh got two off the third delivery to level the scores and collected the winning run off the next ball with a drive to mid-off for a single.

Earlier, Stoute bagged 5-38 from his allotted 10 overs, earning him the Player-of-the-Match prize, but Akeem Saunders hit a run-a-ball, 63 not out that included five fours and two sixes to lead a batting recovery and guide Hurricanes to 226 for nine from their allocation of 50 overs.

Stoute scalped three wickets in his first spell of eight overs to leave the Hurricanes 70 for four in the 27th over before Saunders featured in successive half-century stands with Rahkeem Cornwall and Orlando Peters for the fifth and sixth wickets respectively to take the visitors past 200.

Stoute returned to complete his spell and removed Terrance Warde and Damion Jacobs in successive overs, as the Hurricanes could raise just 27 from the last five overs.