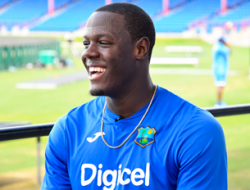 T&T Red Force will be looking for a much improved performance against the Jamaican Scorpions today, when it face off in round eighth of the Digicel PCL at the Queen’s Park Oval in Port-of-Spain.

The Red Force started off the second phase of the PCL campaign in fine style winning on the road against the Windwards Volcanoes but was brought right back down to earth by the Guyana Jaguars who humbled them by 10 wickets in their own backyard last weekend. They go into the clash against the Jamaicans missing West Indies players Evin Lewis and Jason Mohammed from the last clash. The duo is in Barbados preparing for the West Indies match against Pakistan on Sunday.

This defeat prompted a call-in for the management of the team by the TTCB executive for discussions. President of the TTCB Azim Bassarath is backing his team to improve over the last few matches. “We have been having regular consultations with the stakeholders and one cannot change the situation overnight. There are a number of factors one has to take into consideration when dealing with the performances of the cricketers in the longer version and we are working on it.

“We are asking for patience from the public as we deal as best as we can with the situation. Everyone is committed to improvement, the players, management and the board and we are sure to see improvements along the way.” Bassarath said that one common agreement among all stakeholders is that the mental aspect of the players game needs to improve. “We need to work on the players mentally and look to get them to understand their roles and responsibilities a lot better. We are not seeing what we want in terms of thinking through situations during the game and this we intend to work on as we move forward.”

Former T&T leg-spinner Ganesh Mahabir is calling on the TTCB to meet with the players and find out who is really interested in playing the longer format. Mahabir who troubled many top batsmen in his day said, “The best Test players were the best one day players in our time and cricketers need to understand that they have to play the longer format and the success in the shorter format and the money will soon come to them.”

Action at the Oval begins at 10am today.