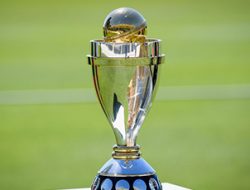 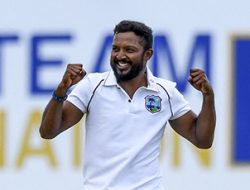 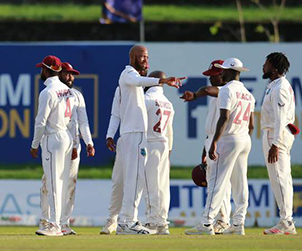 Roston Chase’s secured West Indies lone wicket following Pathum Nissanka’s third Test fifty on a rain-curtailed opening day of the second Test. The sun eventually came after a five-hour delay to allow 34.4 overs of play, after the majority of the day was washed out.

Proceedings commenced with Dimuth Karunaratne winning the toss and opted to bat first. For West Indies, Rahkeem Cornwall and Shannon Gabriel made way for left-arm spinner Veerasammy Permaul and pacer Kemar Roach in the starting XI. The pacers made good use of the new ball and the conditions early on, creating a few half-chances in the process.

Kurunartne (42) hit Roston Chase for two fours in an over before being out caught and bowled off the final ball of the over, ending his the 106-run partnership for the first wicket with Nissanka, who closed on 61 not out off 109 balls with four fours and a six.

Four overs after Kunaratne was dismissed, the umpires called stumps after bad light forced play to halt. Due to the time lost, play will resume on the fourth day at 9:45am local time (12:15am Tuesday Eastern Caribbean/11:15 pm Monday Jamaica Time).

Summarizing the action and looking ahead to the second day, West Indies assistant coach Roddy Estwick said: “I thought the bowlers did OK. Kemar Roach and Jason Holder bowled 13 overs on the trot and went past the bat quite a bit. Their captain is in good form, so we wanted to take the stumps out of the equation and make him hit through the off-side and thought we did that. Tomorrow the aim is to make sure our planning and patience is spot on. Once we do that we can keep restricting them because a wicket-taking ball will be around the corner.”