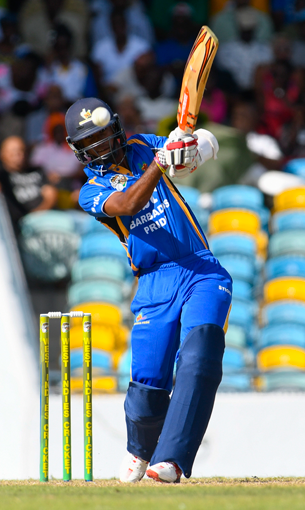 BRIDGETOWN, Barbados, (CMC) – Test opener Kraigg Brathwaite stroked a maiden regional one-day hundred as Barbados Pride opened their Super50 campaign with a 145-run clobbering of Guyana Jaguars at Kensington Oval here last night.
The unflappable right-hander carved out a patient 101, an innings that was the foundation of

Pride’s 302 for seven – their highest-ever 50-overs total at the venue.

In contrast, left-hander Jonathan Carter smashed a stroke-filled 75 off 63 deliveries while captain Jason Holder, with 31 off 21 balls and Ashley Nurse, with 28 off 15 balls, chipped in with cameos down the order

Left-arm spinner Veerasammy Permaul (2-56) and leg-spinner Devendra Bishoo (2-65) claimed two wickets apiece.
In reply, Jaguars never really recovered from a stuttering start and slumped to a miserable 157 all out off 32 overs.

Captain Leon Johnson resisted with a top score of 55 off 68 deliveries but he was the only one to pass 20 as the Jaguars batting, missing the injured pair of Shiv Chanderpaul and Chris Barnwell, collapsed badly.
They seemed to be making a fist of it at 91 for three but lost their last seven wickets for 66 runs, to plunge to a swift defeat.
Their misery was engineered by the pair of left-arm spinner Sulieman Benn (4-35) and off-spinner Ashley Nurse (4-42) who shared eight wickets between them.

Fast bowler Holder, who claimed the first two wickets, finished with two for 15.
Pride took early control of the game even though rookie opener Anthony Alleyne (20) and West Indies batsman Shai Hope (9) perished cheaply.
Brathwaite put on 48 with the left-handed Alleyne who struck three fours in 15 balls at the crease before playing across to Permaul and falling lbw in the ninth over.
Hope lasted 28 balls but perished in the 19th over after adding a slow 22 with Brathwaite, also lbw to Permaul after missing a sweep at 70 for two.

Carter joined Brathwaite to bolster the innings in an up tempo 122-run stand for the third wicket, and it proved the turning point for Pride.
While Brathwaite struck seven fours and a six in playing the sheet anchor role, Carter was more aggressive, counting five fours and four sixes – the latter coming mostly through hefty leg-side blows.
When he was caught down the leg-side swinging at left-arm seamer Raymon Reifer, Holder arrived to sustain the tempo, lashing three fours and two sixes in a 45-run, fourth wicket partnership with Brathwaite.

Holder was one of three wickets, along with Kraigg and Carlos Brathwaite (7) which fell for 16 runs in the space of 18 deliveries to leave Pride on 253 for six but Nurse, who blasted two fours and two sixes, added 49 for the seventh wicket with Roston Chase (20 not out), to give the innings a strong finish.
Jaguars’ reply started shakily when Holder had Shimron Hetmyer caught without scoring at short mid-wicket by Alleyne off the third ball of the innings with just one run on the board.
In the fifth over, Holder found Rajindra Chandrika’s edge for Benn to gobble up the catch at slip for 10, and leave the visitors in further trouble on 22 for two.

Johnson and Assad Fudadin, who made 18, restored some order in a 41-run, second wicket stand.
The left-handed Johnson struck eight fours and a six – a mixture of beautiful drives and well-timed pulls – while Fudadin counted a four and a six in his 31-ball knock.
Nurse claimed Fudadin in the 15th over, bowled missing a swing and Jonathan Foo posted 28 for the fourth wicket with Johnson before holing out in the deep to Carlos Brathwaite off Nurse in the 21st over at 91 for four.

Anthony Bramble edged Benn to Nurse at slip for eight at 107 for five in the 24th over but it was Johnson’s wicket that signaled the end of all resistance, as he fell in Benn’s next over – also to a catch by Nurse at slip – with Jaguars in terminal decline.