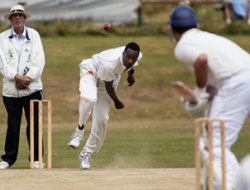 GEORGETOWN, Guyana – One of Caribbean sport’s longest-running rivalries will again grab the headlines, when Barbados Pride clash with Guyana Jaguars in the fourth round, day/night encounter of the Regional Four-Day Championship starting on Friday.

Following a one-week, early-season break, the top-of-the-table clash between the two sides that inaugurated first-class matches in the Caribbean more than 150 years ago, will take centre-stage at the National Stadium at Providence.

In addition to the key match, the fourth round will bowl off today, when Jamaica Scorpions host Trinidad & Tobago Red Force at Sabina Park in another crucial contest – and the following day when Windward Islands Volcanoes and Leeward Islands Hurricanes meet in another bitter rivalry game at Windsor Park.

However, the focus will be on the Pride/Jaguars clash as a battle-royale is expected between the teams and especially with just 0.2 points separating them. Jaguars lead with 33.6 points with Pride on 33.4.

Both teams suffered setbacks in the previous round when they both seemed poised for victory, as rain intervened to wreck the encounters and force draws in all of the matches during the round.

The visitors will be looking to their new run-scoring sensation, opener Anthony Alleyne, who has already amassed an amazing 443 runs from just five outings, at an average of 88.

Much will be expected from in-form opener Anthony Alleyne.

He has passed fifty in each of his last four innings, including a maiden first class hundred – a superb 186 against Trinidad and Tobago Red Force at Queen’s Park Oval in Port of Spain.

Pride have been strengthened for this encounter by the return of five players from West Indies duty, as Kraigg Brathwaite, left-hander Jonathan Carter, wicketkeeper/batsman Shane Dowrich, middle-order batsman Shai Hope and off-spin bowling all-rounder Ashley Nurse have all been included in the travelling squad.

Brathwaite has taken over captaincy of the squad from all-rounder Kevin Stoute.