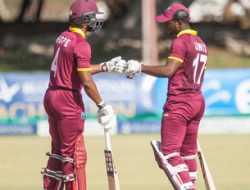 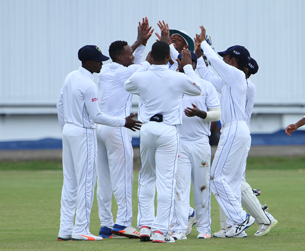 ST JOHN’S, Antigua (CMC) – New front-runners have emerged after second round matches wrapped up Monday in the 2016-17 Digicel Regional 4-Day Cricket Tournament.
Barbados Pride and Leeward Islands Hurricanes have moved to the top of the table forcing defending champions Guyana Jaguars from second to third position.
Pride are leading with 24.4 points after a convincing 292-run victory over Trinidad and Tobago Red at the Queen’s Park Oval.

Leeward Islands Hurricanes are hot on their heels in second position with 24.2 points after a stunning four-wicket win over Jaguars at Warner Park.
Hurricanes executed the highest successful run-chase in the history of the modern first-class championship, to shock the two-time reigning champions on Monday.
T&T Red Force, front-runners after the opening round last week, have dropped to fourth position on 22 points while Jamaica Scorpions are on 21 points after defeating Windward Islands Volcanoes by 41 runs at Sabina Park.
Volcanoes have 9.6 points.
Third-round action starts on Friday with Scorpions at home to Pride, Red Force at home to Hurricanes while Volcanoes take on the visiting Jaguars at the Darren Sammy National Cricket Ground, in a day/night fixture.