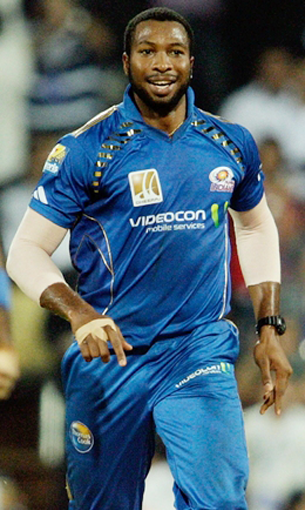 DUBAI, United Arab Emirates –Chasing 156 for victory at the Dubai International Stadium yesterday, Kings entered the final over requiring 14 runs for victory with Pollard on strike and the West Indies batsman finally proved his worth in gold for the franchise.

He gathered a couple in the deep off the first delivery bowled by seamer Aamer Yamin, managed a single off the next ball but was handed the strike again quickly when Imad Wasim took a single off the third ball.

Pollard was kept scoreless off the fourth ball leaving Kings with 10 runs needed from the last two balls but the Trinidadian cleared the ropes at long off with the fifth delivery before depositing the final delivery over square leg to pull off a sensational win.

The right-hander finished unbeaten on 45 from a mere 20 deliveries with a four and four sixes while prolific opener Babar Azam top-scored with 49 from 42 balls.

Babar and captain Kumar Sangakkara (20) had added 53 for the second wicket to put Kings on course for victory before four wickets tumbled for 23 runs in the space of 24 deliveries.

Pollard and Imad Wasim (19 not out) then rescued the innings in an unbroken 55-run, sixth wicket partnership. (CMC)

Pollard’s West Indies counterpart and fellow Trinidadian, Sunil Narine, was brilliant in his four overs of off-spin, taking one for 19. Sent in earlier, Qalanders were carried by an unbeaten 32 from Mohammad Rizwan and 31 from captain and opener Brendon McCullum, while Narine lashed two sixes in a six-ball 19 batting at number five.

Kings moved into fourth spot in the standings on six points but a defeat in the remaining preliminary game on Sunday could see them eliminated. In the other game, neither captain Darren Sammy nor Marlon Samuels had much of an impact but Peshawar Zalmi still managed to beat Quetta Gladiators by two wickets with four balls left in their final game, to go top of the table.

Sammy suffered the indignity of a first ball ‘duck’ while Samuels scored seven as Zalmi, chasing 129 for victory, slumped to 52 for six in the 10th over.

But Shahid Afridi arrived to hit an explosive unbeaten 45 off 23 deliveries to drag Zalmi over the line.