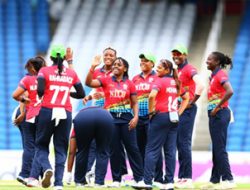 FICA Board Meets in London 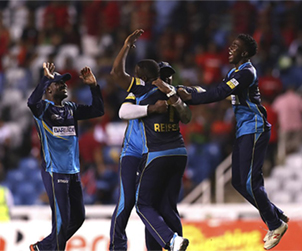 11th October 2019 Comments Off on Nurse And Reifer All- Round Show Fires Tridents Into CPL Final Views: 911 News

Nurse And Reifer All- Round Show Fires Tridents Into CPL Final

Nurse’s intervention was crucial in both innings, first when blasting an unbeaten 24 from nine balls to propel a stuttering Tridents innings up to 160/6 and then taking two key wickets to help strangle the Knight Riders’ run-chase.

Having been put into bat, the Tridents looked set to make an under-par total for the majority of their innings until Nurse and Raymon Reifer – who later also played his part with the ball, bowling a nerveless final over that included the vital wicket of Seekkuge Prasanna for a 27-ball 51 and the match-clinching one of Khary Pierre – plundered an unbroken 48 runs for the seventh wicket from the final 14 balls.

With the Knight Riders ultimately coming up 12 runs short, the final two overs when the Tridents batted were the difference between going to Saturday’s final and going home.

Johnson Charles could have been dismissed twice early in his 35, dropped by Denesh Ramdin in the first over of the night and then seeing a skied shot land safe after Lendl Simmons and Chris Jordan left it for each other.

While never quite at his fluent best, Charles’ effort was crucial in holding things together during a fraught first half of the Tridents innings in which Hales and Shakib fell to Pierre and JP Duminy was forced to hobble off retired hurt after injuring his leg while hitting a six. The Tridents will be desperate to have him available on Saturday.

Charles followed Duminy straight off the field, skying Ali Khan to Jordan at mid-off to leave the Tridents in bother at 74/3 – effectively four down – in the 12th over. Things got worse for them two overs later when Jonathan Carter was spectacularly caught and bowled by Jordan, who flung himself to his left in his follow-through to pluck the ball from the air inches above the grass.

When Jason Holder picked out Colin Munro at deep midwicket in the same over, the Tridents were 92/5 with time running out and the innings in real danger of falling away completely.

That didn’t happen. Shai Hope played nicely for his 23 from 18 with two fours and a six, before Reifer and Nurse gave the innings its all-important explosive finish.

Both men finished 24 not out, with five Hero Maximums between them.

Even then, 160/6 was no more than a par score in tricky conditions for bowlers coping with a wet ball.

Sunil Narine got the TKR innings off to a flying start with four boundaries from Shakib’s opening over and, although he and Lendl Simmons both fell in the powerplay, the Knight Riders were well on course at 50/2 after six overs.

Enter the 2019 Hero CPL leading wicket-taker to change the momentum once again. Hayden Walsh Jr picked up his 20th wicket of the tournament when Colin Munro reverse-swept straight to that man Nurse at short third-man.

When Nurse then removed Darren Bravo caught behind for just 2, the Knight Riders had lost two wickets for just 12 runs in 3.3 overs since the powerplay.

Denesh Ramdin holed out to long-on to hand Nurse a second wicket in a four-over spell that also gave up just 14 runs.

The game lurched back TKR’s way when Prasanna started smacking everyone to and over the ropes, but he was also at fault in the mix-up that led to the run out of Knight Riders skipper Kieron Pollard for 23. On a night full of crucial moments, here was another.

Prasanna was undeterred, though, and powered to a 22-ball half-century with back-to-back sixes – his third and fourth in all – off Walsh Jr. When 20 were needed from the last 15 balls, it looked like the Knight Riders’ game to lose.

Walsh Jr ended his spell of 2/31 with three dot balls, though, and Harry Gurney delivered at the death once again with a superb 19thover that gave up just six runs and brought the wicket of Jordan.

That left Prasanna and the Knight Riders needing 14 from the final over with two wickets in hand. When Reifer pinned Prasanna with a millimetre-perfect yorker to start that final over, a topsy-turvy game finally looked settled. Pierre was caught by Hales at long-on two balls later to confirm it.