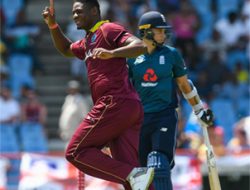 ST. JOHN’S, Antigua – Bowling stocks look strong for the moment, so it will all be about the batsmen to finalise the cast for the West Indies Test squad in the New Year when the 2019-20 West Indies Championship opens on Thursday.

With seven Tests on the cards for West Indies this year when they resume their participation in the ICC Test Championship, this season’s West Indies Championship presents a perfect opportunity for a number of hopefuls to advance their cases.

The winner of the Championship also holds intrigue with defending champions Guyana Jaguars seeking to become the first regional first-class side to complete six successive titles.

Among the strong contenders are Barbados Pride, the runners-up to the Jaguars in each of those title-winning seasons, and Leeward Islands Hurricanes, one of the main challengers last season before they stumbled late in the season.

Darren Bravo and John Campbell, two top-order West Indies left-handed batsmen, have been made captains of Trinidad & Tobago Red Force and Jamaica Scorpions respectively, for the first time in their playing careers.

Red Force, Scorpions and Windward Islands Volcanoes, also under new leadership with emerging batsman Kavem Hodge being appointed captain, are hoping these decisions could help to spark a revival in their fortunes.

Hurricanes vs Jaguars at the Vivian Richards Cricket Ground, Antigua

Hurricanes and Jaguars have provided plenty of intrigue during their matches in the previous five seasons.

But Hurricanes have two valuable wins during the same period on which they can draw to give them confidence that they can repel the challenge of the Jags.

They completed the highest successful fourth innings chase in the West Indies first-class competition three seasons ago and won a feisty battle in the final round last season on the Jaguars’ home soil, a rarity in recent years.

One of the players to watch in this contest will be Hurricanes pacer Sheeno Berridge. He made a big impact during the Colonial Medical Insurance Super50 Cup this past November and will want to make further strides in the four-day format.

Two personal milestones appear within reach in the match for two Jaguars players. Christopher Barnwell has scored 1,971 Championship runs and needs 29 more for 2,000; and West Indies leg-spinner Devendra Bishoo has taken 241 wickets and needs nine for 250.

All except two of the previous 10 contests between Red Force and Scorpions during the Professional Cricket League era of the Championship have produced a winner and the two teams have equally shared the wins.

Three of the four Scorpions wins during that period have come in the Red Force’s backyard, but the home team have a bit of an advantage, having won this corresponding contest last year at this venue.

The form of the two captains will be closely monitored by those to whom it matters most, but uncapped, young players like Jeremy Solozano, Joshua da Silva and former West Indies Under-19 player Keagan Simmons of Red Force will also be on the radar, as well as left-arm spinner Dennis Bulli of Scorpions.

Pride have dominated their matches against Volcanoes in the PCL era of the Championship, winning six out of 10.

The Volcanoes must also be wary that the Pride have won all three times the two teams have played at this venue during that period.

This contest features a number of uncapped players that could catch the eye of the West Indies senior selection panel.

Hodge will be important to the balance of power in the Volcanoes batting, Desron Maloney is a newcomer that made an impression during the Windwards senior tournament and Josh Thomas made a bit of an impact with ball in his debut season last term.

• Visit the CWI website, www.windiescricket.com, for “live” scoring of the matches

•  Matches are available on the Windies YouTube Channel, https://tinyurl.com/yg63cod3, and you can subscribe to receive pre-play alerts