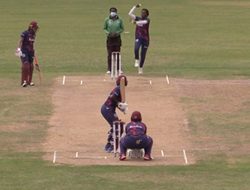 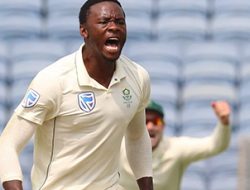 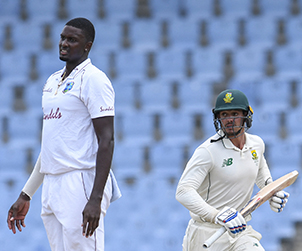 Jason Holder was the key West Indian performer on the day, but his efforts played second fiddle to Quinton de Kock’s unbeaten century which kept South Africa on top in the first Betway Test match, on Friday. Resuming the second day on 128-4, South Africa’s 1st innings total of 322 revolved around de Kock’s superb 141 not out – his sixth Test hundred and first against West Indies. It was also his highest Test score and came off 257 balls with 12 fours and seven sixes.

Holder, who finished with 4-75 took the lone wicket for West Indies in the morning session – Rassie van der Dussen (46) caught by Shai Hope diving forward in the gully, as South Africa went to lunch on 205-5. Soon after the interval, Holder dismissed Wiaan Mulder (25) caught by wicket-keeper Joshua Da Silva to end a 53-run fifth wicket partnership with de Kock, who started to go into attack mode. He played well with the tailenders and gave the visitors a first innings lead of 235 runs.

Batting a second time, West Indies lost four wickets to the pace of Kagiso Rababa and Anrich Nortje to close the day still trailing by 143 runs in their second innings. Rabada got both openers in captain Kraigg Braithwaite (7) and concussion substitute Kieran Powell (14) leg-before wicket. The introduction of Nortje then saw him dismiss Shai Hope (12) and Kyle Mayers (12) both to catches by Mulder at third slip, leaving West Indies at 51-4 in the 18th over. 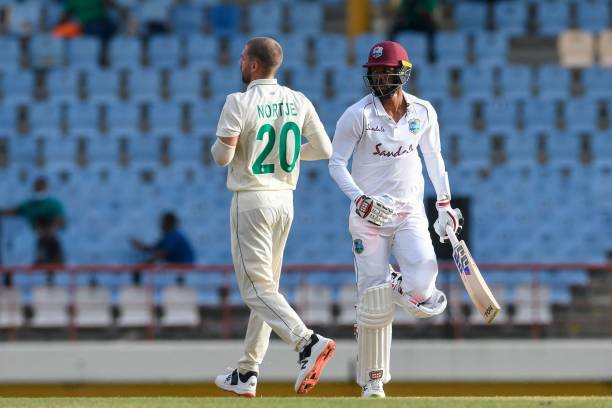 Roston Chase (20 not out) saw out the day with Jermaine Blackwood (10 not out) for the West Indies without further loss.

The match resumes on Saturday. First ball is 10am (9am Jamaica Time).