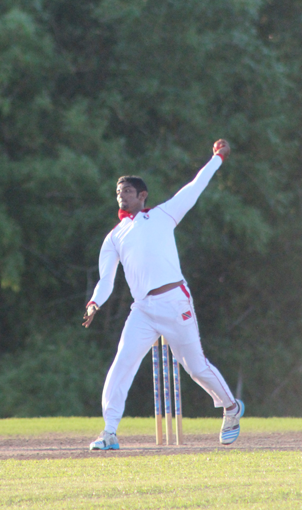 The left-arm spinner has so far grabbed 51 wickets this season which includes an astounding eight five-wickets hauls to underline his status as one of the best slow bowlers in the nation.

With two rounds of cricket yet to be played, Kantasingh is a leading contender for the prestigious best bowler award in the league competition.

“I have been maturing as a cricketer as I continue to play. My maturity is visible in my game where I have more control over my deliveries and the variations I use,” the 29-year-old said.

This is the first full season of local cricket Kantasingh is participating in after returning to the University of the West Indies, St. Augustine for the last two years to finish his undergraduate degree in engineering.

“If you look at the trend of spinners in First Class and international cricket you will notice they tend to get better from ages 29 to 34. You tend to understand the art of spin bowling the older you get because you mature as a player. I am now coming into my own and I have definitely not peaked as yet.

“Returning to play club cricket after representing the Red Force (national team) made it necessary that I dominated the league tournament. If you play First Class cricket you must be able to dominate club cricket to show that you are in the elite bracket of cricketers in the country,” the central Trinidad player said.

Kantasingh, who has been a top player for the Combined Campuses and Colleges player in the west Indies Cricket Board Four-day Tournament said that his ability to better understand the game and decipher the weaknesses in opposing batsmen has developed significantly on his return to the game after completing his studies.

“I have become better at working out batsmen and understanding when to use different deliveries. Since I started playing I was always very analytical and my reading of the game has improved. Adapting to different situations and knowing how to bowl in different formats of the game has developed significantly over the past season,” said Kantasingh.

A former star West Indies Under-15 player, he added: “For the past couple of months I have been working arduously on my game. My bowling is maturing and this has significantly increased my confidence. At this stage of my career I am very confident that I can dominate club and regional cricket once I am given the opportunity.

“Having a Red Force contract really changed my career because for the first time I was able to focus solely on cricket. Right now I am at a defining point in my career where my understanding of the game and confidence can really push me to the next level,” he said.