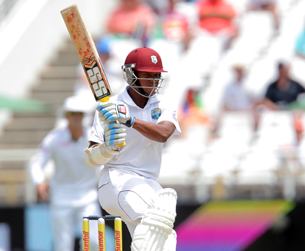 West Indies opening batsman Leon Johnson says he wants to do well for the West Indies and fellow left hander Darren Bravo mentioned that he saw it in his eyes. The two batted well for the regional side at the beginning of the second innings against Pakistan in Dubai, with Bravo getting a century and Johnson 47.

Their efforts were in vain however, as chasing 346 runs for victory, the West Indies made 289, losing by 56 runs. Today, they open the second Test match of the Haier Cup series in Abu Dhabi and Johnson is looking for more runs.

“I am confident going into this second Test against Pakistan at Abu Dhabi. Obviously, the runs I scored in the second innings of the first Test gave me confidence and I am really looking forward to doing well here.

“I tried to be more positive in the second innings especially against the leading bowler Yasir (Shah). In the first innings I expected to see the ball doing more because looking at the previous series between Pakistan and England, Mohammed Amir and Sohail Khan swung the ball. So going into the first innings, that was on my mind. However, I decided to change my mindset for the second innings and it worked for me and I am hoping to carry on during the rest of the series.”

Johnson, who scored 15 in the first innings said he enjoyed batting with Bravo.

“It was good looking at Darren from the other end. He was playing with freedom and ease and when I was getting edgy he helped me. I remember him telling me he can see in my eyes that I want to do well.”

Johnson was happy with his team’s fighting effort in the first game and is hoping for more of the same in Abu Dhabi.

“The fighting quality was really good, for the first day and a half Pakistan was in the driver’s seat and going into the last session of the fifth day, anyone could have won.

“We always speak of taking games into the fifth day and see how it goes from there. We pushed Pakistan in that Test and it was good. The way we batted in the first innings kept us in the game.”

Batting first, Pakistan scored 579 for three declared and the West Indies responded with 357. Batting a second time, Pakistan was blown away for 123 by Devendra Bishoo, who recorded Test best figures of 8/49.

Johnson, who has skippered Bishoo in the Guyana Jaguars team said, “Bishoo is all about confidence. He did not bowl badly in the first innings and did extremely well in the second. Late in the first innings he started to pitch right and in the second he continued to pitch well. He is a confidence bowler, so once he got it right, he was able to get the wickets for us.”

Johnson says the fight the team has shown gives him confidence for the next two Tests.

“We have not won a Test series in a long time and Pakistan have not lost here in a long time. We need to take it one step at a time and hopefully, if not win, we can draw the series.”