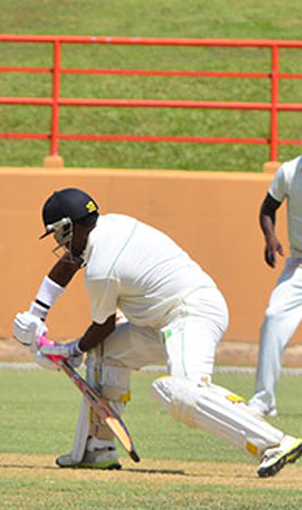 WITH one eye on the weather, points leaders Guyana Jaguars take on Windwards Volcanoes in the second round of their West Indies Cricket Board/Professional Cricket League Regional 4-Day contest, which bowls off at the Guyana National Stadium from 09:30hrs today.The Guyanese have 17 points, following their innings and 10 runs victory over the Leeward Islands inside three days, when the two sides met in the first round at the same venue last week, but what will be of concern to their coach Esuan Crandon and his team of assistants is the catching.

They put down five chances on what turned out to be the final day against the Leewards, catches if taken would have seen the margin of victory being larger, while the victory would have been achieved earlier.
Against the Volcanoes, who suffered a 13- run loss to Jamaica, the Jaguars would have to ensure their paws cling onto each and every chance offered, even the fingernail taking opportunities, while their ground fielding would also have to be of the best.

The possibility exists, that the home team will play an unchanged side for this contest, giving skipper Leon Johnson and dependable middle order batsman Shivnarine Chanderpaul much needed batting practice before their departure for South Africa with the West Indies team, which means Trevon Griffith and Vishaul Singh will be relegated once again to towel and water duties.

However, vice-captain Assad Fudadin would have to buckle down and put a total to his name at the top of the order, where he starts things with Rajendra Chandrika, with Johnson, first round centurion Narsingh Deonarine, Chanderpaul, Raymon Reifer and all-rounder Christopher Barnwell to follow.

The form of the Guyanese batting line-up should not be questioned, as wicketkeeper/batsman Anthony Bramble and spinners Veerasammy Permaul and Devendra Bishoo are all capable lower order batsmen, proving such time and time again for Albion Cricket Club.

Against the Leewards, 22 year old West Indies ‘A’ fast bowler Ronsford Beaton bowled with pace and aggression, especially midway during the second day just after lunch and tea, when he had the frontline batsmen on their back foot.
With the weather that has been prevailing over Guyana for the past 72 hours, the ground staff would not have had much time to work on the track, which means it can be lively, hence Beaton, Reifer and Barnwell can do some magic with the new ball, making way for Permaul, Bishoo and Deonarine in the spin department.

For the Volcanoes who will be led by Liam Sebastien and have a lineup that includes discarded West Indies opener Devon Smith, Andre Fletcher, Johnson Charles and Sunil Ambris, they will fancy their chances against their host, especially after a good first round showing against Jamaica.

Even though they lost by 10 runs, there were some individual performances that would have brought smiles to the faces of Sebastien and his coach Ian Allen, as Smith and fellow opener Tyrone Theophile posted 97 for the first wicket, commencing the hunt of 261 for victory, after Alston Bobb set things up with his 5 for 48, backed by Mervin Matthew’s 3 for 19.

Bobb also contributed 39 to rally the lower order who failed to respond amicably well and in addition to such, the last time the two sides met in the WICB Regional 4-Day season earlier this year, Sunil Ambris made his debut and chalked up a ton – 114 in the process, while Permaul had a 10 wicket haul for Guyana.

Ambris, Charles, Fletcher, Romell Currency and wicketkeeper/batsman Lindon James would all be looking to contribute with the bat, while Matthew, Sebastien, Bobb, Kenroy Peters and Nelon Pascal will take care of the bowling department.

Peter Nero and Nandkumar Shivsankar are the men calling play at 09:30hrs, after Match Referee Colin Stuart would have tossed the coin at 09:00hrs weather permitting, with Imran Moakan as the third official.