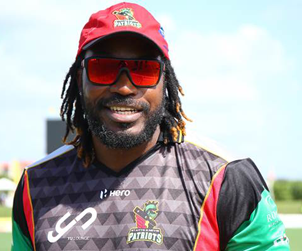 The Universe Boss marked his 50th CPL match with his 63rd T20 fifty as St Kitts & Nevis Patriots brushed past Jamaica Tallawahs by 37 runs to clinch a place in the playoffs for the first time in their three-year history.

Chris Gayle made the most of a life on 15 to top-score with 71 not out off 55 balls as the Patriots racked up 208 for 3, the highest total of the CPL this season, and the second-highest including the previous four. Armed with scoreboard pressure, they were then able to restrict the Tallawahs to 171 for 7 in reply with left-arm wristspinner Tabraiz Shamsi picking up 3 for 35 in four overs.

A night to forget in the field

Tallawahs did themselves few favors over the course of the night, following up Kumar Sangakkara’s decision to bowl first by producing a slipshod fielding performance either side of a 35-minute rain delay at the eight-over mark. The Patriots had a comparatively modest start, only scoring 38 in the Powerplay, but a key moment occurred in the sixth over when Gayle was spilled at long leg by Odean Smith.

Kesrick Williams tucked Gayle up trying to pull and sent the chance Smith’s way, but the 20-year-old was perhaps preoccupied trying to position his body to stay within the ropes. He wound up bobbling the ball initially before dropping it altogether as it bounced over for four. Smith followed up in the next over and was swiftly punished by Lewis three times to the cover and fine leg rope as he motored toward 69 off 39 balls. By the time the Gayle-Lewis stand ended, they had piled on 110 off 12.3 overs.

After Lewis fell, Carlos Brathwaite and then Mohammad Nabi teed off at the other end. Like Gayle, each had early let-offs. Brathwaite was put down by Andre McCarthy on 13 to end the 15th over before finishing with 26 off 13 balls. Nabi should have been taken on his first ball but Jonathan Foo bailed out of a chance.

While Gayle was sedate for most of his innings – he took 46 balls to reach his half-century – he sprang to life in the 18th over, smashing Mohammad Sami for a four and two sixes off consecutive balls as part of a 25-run over. Two more sixes by Nabi off Rovman Powell and Williams off the last two overs took Patriots past 200.

Tallawahs gave a hearty effort early in the chase but never seriously challenged the Patriots total. Jonathan Carter made the initial breakthrough as Trevor Griffith miscued a full toss on 42 in the ninth over.

Tabraiz Shamsi burrowed his way through the Tallawahs in the middle overs, finishing with 3 for 35 as five of the final six wickets fell to spin. Glenn Phillips fell three balls after drinks, as he tried to hit Shamsi over midwicket for his second six in a row but only managed to pick out Shamar Brooks. Shamsi was involved in the wicket of Sangakkara next, snaring a catch at point off Nabi to set the Tallawahs back further at 87 for 3 in the 12th over.

Lendl Simmons then found Brooks on the midwicket boundary again for Shamsi’s second wicket in the 13th over before Foo missed a sweep in Shamsi’s next over.