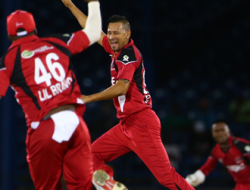 Shiv Chanderpaul showed he still has plenty to offer in limited-overs cricket by striking an unbeaten 98 to guide Guyana into the Nagico Super50 final with a six-wicket win over Jamaica in Port-of-Spain. Guyana will face the winner of Friday’s second semi-final between Trinidad & Tobago and Combined Campuses & Colleges.

Chanderpaul opened Guyana’s chase in pursuit of Jamaica’s 188 for 9 and displayed his array of typical nudges and nurdles to graft his way to a half-century off 91 balls. He hit four boundaries along the way, the only ones for Guyana as the run rate hung below three per over through 31 overs.

The left-hander had been doing most of the work himself as he struggled to find a steady partner. Just a few balls after Chanderpaul brought up his fifty, Guyana allrounder John Campbell struck for the third time, bowling Christopher Barnwell for 6, to make the score 90 for 4 in the 32nd.

Royston Crandon came to the crease and teamed with Chanderpaul to take Guyana the rest of the way. The pair produced an unbroken 99-run stand as Crandon struck three fours and a six in his 45 off 51 balls to help ease some of the pressure off Chanderpaul. Chanderpaul eventually chipped a two to mid off for the winning runs with 11 balls to spare, ending two short of a deserved century off 142 balls.

The victory was achieved after Guyana had won the toss and sent Jamaica in to bat. Jamaica got off to a confident start, reaching 51 without loss at the start of the 16th over before the wheels came off in spectacular fashion. Steven Jacobs trapped Campbell on the back leg for 21 his opening partner Nkrumah Bonner was done in by the new batsman Jermaine Blackwood and was run out for 24 by Chanderpaul fielding in the covers.

Veerasammy Permaul then seized on the opening by recording a double-wicket maiden in the 19th. Blackwood was given leg before defending down the wrong line on the front foot and four balls later Danza Hyatt was unfortunate to be given out caught behind for a duck after replays showed a gap between bat and ball while coming forward to defend.

After being 51 for 0, Jamaica were under severe pressure at 54 for 4 and they struggled to rebuild from there. Horace Miller took on the responsibility to prop his side up and made 64 off 79 balls coming in after the fall of Hyatt. Miller stayed until the 48th over when he was bowled by Devendra Bishoo, who had earlier burst through the tail and finished with 3 for 33. Permaul, whose earlier damage had set up the low target, finished with 3 for 38.