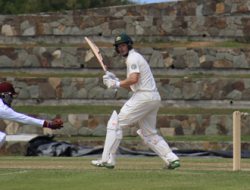 1st June 2015 Comments Off on Can Fawad the symbol become Fawad the spinner? Views: 1039 News

How many times have we heard that said of Fawad Ahmed, and how many times have we said it ourselves? The tale spanning 10 years, two continents, a refugee claim, an advocating cricket board, a receptive government, sub-district, club, state and national teams is now at a point of resolution, if not conclusion. To see Fawad don a baggy green in Dominica on Wednesday would be a tonic not only to all those who have worked to help him, but also to those many Australians who have not always felt truly represented by a list of names invariably Anglo in origin.

For all the symbolism, cultural significance and even romance of Fawad’s story, there is now a tipping point that has little to do with grand gestures, statements and ideals. Australia’s selectors on tour, Mark Waugh and the coach Darren Lehmann, are tasked with clearing their heads of all the above to answer the simple question: is he good enough, or at least, is he better for Windsor Park than one of Josh Hazlewood, Mitchell Starc or Peter Siddle? Fawad knows this.

“People may admire you in a different way but for me I have to perform well on the field as well to justify my selection, that’s the main thing,” Fawad said. “Whatever background you are – there are so many other different stories as well, it might be the guys who come from the countryside and been through tough times. They might have left their families as well to go to the city to play cricket. So there is a story behind every single person. Definitely I have to perform to justify my selection.”

So far, much of the discussion of Fawad’s bowling has been rudimentary. There were rave reviews from Cameron White and James Hopes a couple of years ago, a few impressed reactions from television commentators in one-day domestic and Twenty20 matches, and countless recitations of his statistics, which leave those of all other spin bowlers in Australia – save for Steve O’Keefe – very properly in the shade.

What then is in Fawad’s legspinning bag? He has height and power, supporting a high action capable of extracting bounce, though not lurching too far past the perpendicular as to hinder side spin. He has a neatly disguised googly that he wisely uses only sparingly. There are also top spinning and skidding variations, one of which hurried through a well set Rajindra Chandrika in the Antigua tour match. From his close to the stumps release point he has harnessed flight and variations in pace, while preferring a line more middle and off than the leg stump attack once favoured by Shane Warne.

These strengths were seen in abundance during this year’s Sheffield Shield final, where he beat batsmen on front and back foot, on outside and and inside edges, top order, middle and tail. His captain and wicketkeeper Matthew Wade often posted a second slip, something Fawad would no doubt love to see from Michael Clarke. The chance to bowl to the fields of one of the game’s more tactically agile captains is another reason to think Fawad can prosper.

Then again, there are a few caveats for Lehmann and Waugh to work through. Fawad’s action can be smooth at his best, but also loose and inconsistent when he is out of rhythm – the leap at the crease and dependence on a huge drive through the shoulders rather than any great momentum in his approach may be one such source of this disparity. He can struggle at times with line or length and some opponents will remember days when on spinning pitches he has been unable to land the ball in the spots likely to cause most problems for the batsmen.

Fawad’s capacity to overcome his own nerves and anxieties is also in question. Some might say this is remarkable for a man who as we all know has suffered through events far more uncertain than whether he will get to play a cricket match or not. Nevertheless he has commonly produced his best when granted a sustained run of overs and matches, feeling more comfortable in the Victorian dressing room and thus bowling like a man not thinking too much about his place in the team. This is only natural, but Lehmann and Waugh must weigh up his ability to cope.

“The first innings [in Antigua] I would say, not really good,” Fawad said. “I started really well. The first seven or eight overs it looked like I was going to take a wicket with every single ball. It was really good. After the rain break, I’m not sure what happened. When I came back, I’ve never bowled that many short balls. but it happened and I’m happy it was in the practice game so it’s all gone. Second innings I bowled really well. I was happy with control, pace and spin. All the varieties came out really nicely. I really enjoyed that.

“I think it happens to everyone when it comes to the time when they ask you to perform well or do your best in only one game and prove yourself. I think it’s a different culture in the Australian system. I’ve come off a really good Sheffield Shield season. Not only one season, but two-and-a-half seasons In Australia, limited overs as well. They’re not just going to look at six, seven eight overs that went not as well as normally. They know what my ability and skills are.”

Most Australians are less sure of Fawad’s skills than Lehmann, Waugh or any batting member of the Australia tour party who has groped at a ball spinning sharply away from them in the nets on this trip. This is partly because he has not yet been granted the opportunity to show his wares in front of an audience as wide as that of a Test match, but also because he has been portrayed largely as a “great story” rather than the best wrist spinner in the country.

For evidence of this, one needed look only as far as the Twitter reactions to a piece posted by cricket.com.au – a fascinating, even moving long read drawing immediate questions about Fawad’s decision to decline wearing the sponsorship badge of a brewing company by dint of his Muslim faith. The fact this was old news made for an even more unsettling sight. Mercifully, Fawad has encountered no such bigotry in the Australian dressing room.

“They are familiar with me now,” he said. “Everyone knows about my prayer times, my culture and everything. Everyone knows Ramadan is coming next month. There is no such problem. And I can adjust it pretty easily. We have only one prayer time during the game and I can pray within three, four hours anytime. The lunch break or the tea break I can pray either. That’s not an issue.”

At issue in Dominica is not culture, race, religion or background, but cricket. One question from the Australian team remains to be answered by Fawad. “It’s a great story … but can he do the job for us?”