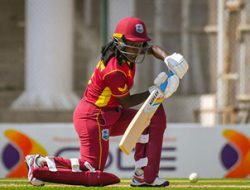 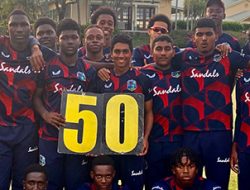 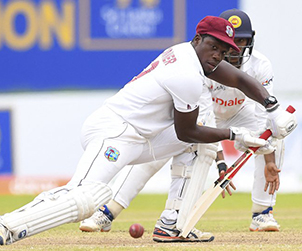 Nkrumah Bonner played a defiant knock as he tried to keep the Sri Lanka bowlers at bay, but his heroic effort was not enough as West Indies lost the first Test on the fifth afternoon. The tall right-hander came into the final day with a stated mission to defy the Sri Lanka bowling attack and save the match for West Indies.

Bonner carried the team on his shoulders in a back-to the-wall performance, but the other wickets fell around him to Sri Lanka’s spinners – who took 19 of the 20 wickets in the match. On the fourth day West Indies were tottering at 18-6 after being set a victory target of 348 and Bonner joined wicketkeeper Joshua Da Silva in a rearguard action.

They resumed the final day on 52-6 and added 62 more runs. Bonner faced 173 balls on the last day and stayed at the crease for over three hours to end on 68 not out. Overall, his innings lasted 4 ½ hours, he faced 220 balls and hit seven boundaries.

Da Silva also demonstrated tremendous fighting spirit as he batted close to three hours and faced 129 balls, for 54. He brought up his third Test half-century but as soon as they got to the 100-run partnership, Lasith Embuldeniya crucially struck for Sri Lanka a few overs before lunch. He got the ball to spin away from the right-hander, who edged it to the safe hands of Dhananjaya de Silva at slips.

For Sri Lanka, Embuldeniya took his fourth career five-wicket haul while fellow spinner Ramesh Mendis added four wickets. Embuldeniya, who had innings bowling figures of 5-46, had six wickets in the match while Mendis with 4-64 had a seven-wicket match total.

The Player-of-the-Match award went to Sri Lanka captain Dimuth Kurunaratne. The left-handed opener made 147 in the first innings and followed up with 83 in the second innings.

The second Test match will be played at the same venue, starting on Monday.