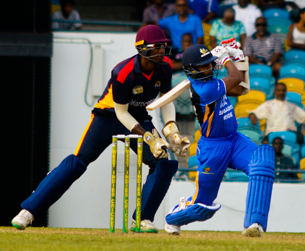 Jamaica jumped from fourth to second place on the Group B table with a 67-run win (Duckworth-Lewis method) in a rain-affected match against ICC Americas on Wednesday. With the game reduced to 46 overs a side, Jamaica recovered from a shaky 53 for 3 to post 251 for 5, after fifties from Andre McCarthy (63 off 87 balls), John Campbell (66 not out off 42 balls) and Rovman Powell (52 not out off 38 balls). Campbell and Powell put together an unbroken 101-run partnership for the sixth wicket, which came at a scoring rate of 9.04. This was Powell’s second successive fifty in the tournament.

Set a revised target of 254, ICC Americas were anchored by opener Kamau Leverock, who struck 75 off 83 balls. The rest of the batting, however, failed. ICC Americas lost seven wickets for 57 runs, folding for 187 in the 45th over. Legspinner Damion Jacobs took 5 for 24, his second five-for in List A cricket, to aid his side’s bonus-point victory.

Barbados steamrolled Combined Campuses and Colleges by 200 runs for their fourth consecutive win in the tournament. Having compiled 294 after opting to bat, Barbados bowled CCC out for a mere 94 runs in an innings that lasted 36.2 overs. CCC gave up their last seven wickets for 50 runs, with the only notable contributions coming from Vikash Mohan (29) and Amir Jangoo (23). Sulieman Benn was the best bowler for Barbados with 3 for 25, while Jason Holder and Ashley Nurse took two wickets each.

Earlier, strong performances from the batsmen took Barbados to a strong total, despite a late slump that saw them lose six for 36 in three overs. Of the top six batsmen, only one failed to score more than 30, with the top score coming from Roston Chase, who struck a 55-ball 76.