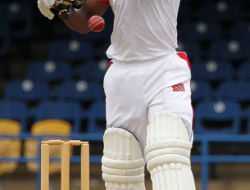 With the first 90 minutes of play disrupted by rain, and the remaining sessions washed out, the visitors are 263 runs behind the Guyana Jaguars first innings total of 311.
When play eventually commenced at 16:30hrs, Kraigg Brathwaite stroked the first ball of the day firmly through the cover off the front foot off Keon Joseph (1-13),and then fellow opener Anthony Alleyne punched Raymond Reifer (1-20) through extra cover on the back foot for consecutive boundaries in the next over.

However, the pacers gave the hosts the early breakthroughs to put the Barbadians on the backfoot at 17-2 inside the five six overs of the day’s play.
Reifer removed the left-handed, Alleyne (8) in the fourth over with a trademark left-arm pacer’s line. It was a wide ball outside off-stump, and Alleyne’s eyes lit up and he slashed it hard with an angled bat to Rajendra Chandrika at gully.

Brathwaite (6) was sent back by Joseph in the fifth over with a peach of a delivery. The well-directed bouncer saw the West Indies Test vice-captain go for a hook shot which he gloved and was taken by wicket-keeper Anthony Bramble.
Shai Hope and Shamarh Brooks joined forces and showed some early signs of discomfort, but they then settled down and played sensibly to steady the innings, with Hope playing a couple of sumptuous shots for fours.

The extent of their assurance took the visitors to dinner at 18:00hrs, with Hope unbeaten on 20, while Brooks had ten.
However, no play was possible thereafter, and play was called off at 21:20hrs.