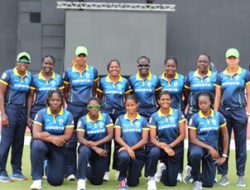 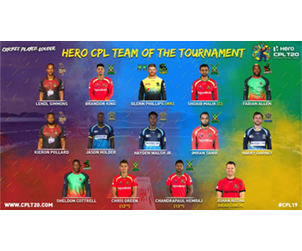 The Hero Caribbean Premier League (CPL) have announced the team of the tournament. This has been selected by Tom Moody, Hero CPL’s Director – International Cricket, along with the commentary team – Mark Butcher, Danny Morrison, Dirk Nannes, Ian Bishop and Daren Ganga.

The team will be captained by Shoaib Malik (313 runs at 78.25) who successfully led the Guyana Amazon Warriors to a record 10 victories in the group stages to leave his team unbeaten in the tournament thus far. He is joined by fellow Amazon Warriors, Brandon King (453 runs at 56.62) and Imran Tahir (15 wickets at 11.53) who have both played an integral part in the Guyana franchise’s record breaking tournament.

The sole representative from the Jamaica Tallawahs is Glenn Phillips (374 runs at 37.40) who will also be the wicket keeper for the team. Phillips was the leading light for the Tallawahs who had a tricky season, but the Kiwi ‘keeper-batsman did brilliantly at the top of the order.

The Trinbago Knight Riders have two players in the team, Lendl Simmons and Kieron Pollard. Simmons (429 runs at 42.90) was a late replacement in the Knight Riders squad but has done a superb job at the top or the order as his team made the playoffs once again. Pollard (349 runs at 58.16 and 6 wickets at 29.66) stepped up to the captaincy after Dwayne Bravo pulled out of the tournament through injury and has led from the front with both bat and ball.

The Barbados Tridents have three players who make the team. Jason Holder (14 wickets at 23.07) and Harry Gurney (10 wickets at 16.3) both getting the nod. Holder and Gurney have been superb with the new ball for the Tridents as their team finished second in the points table. The other member of the Tridents who is selected is Hayden Walsh Jr (21 wickets a 12.19) who has claimed five wickets in one innings and four in another as the USA spinner had a breakout season.

The St Kitts & Nevis Patriots have representation from Fabian Allen (218 runs at 27.25) and Sheldon Cottrell (12 wickets at 19.25). Allen has scored his runs at a remarkable strike rate of 177.23 during the 2019 Hero CPL and has also been one of the fielders of the tournament. Cottrell has been saluting his way to success once again as he starred with the new ball and at the death for the Patriots.

The Head Coach of the year is Johan Botha who has taken Guyana Amazon Warriors into the CPL final with 11 straight wins. The 12th and 13th men are also from Amazon Warriors, with Chris Green (13 wickets at 20) and Chandrapaul Hemraj (298 runs at 27.09, 5 wickets at 17.2) making up the rest of the squad.

HERO CPL TEAM OF THE TOURNAMENT