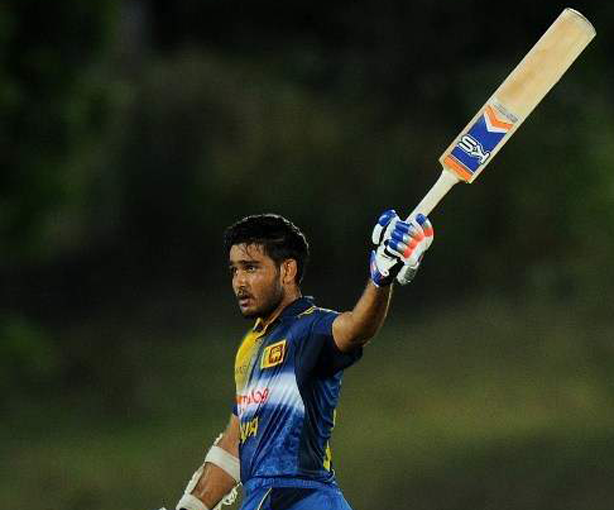 Sri Lanka’s seamers ploughed through the West Indies top order then weathered a Marlon Samuels surge to set up a 19-run Duckworth-Lewis victory and complete the series whitewash. Buoyed by Samuels’ 94-ball 110 not out, West Indies got to 206 for 9 from their 36 overs, but, having had them at 105 for 6 before a 135-minute rain interruption, Sri Lanka had that total scaled down via the Duckworth Lewis method. Kusal Perera top-scored with 50 off 47 balls in a chase of 190. Sri Lanka had moved to 179 for 5 after 32 overs when rains came down again to end the match. The par-score at that final interruption was 160.

A West Indies victory always seemed unlikely when they lost four batsmen in the first six overs. Lasith Malinga and Suranga Lakmal collected two wickets each in their opening bursts, then a little later Dushmantha Chameera dismissed Denesh Ramdin with raw pace. Ajantha Mendis had also claimed a wicket before the big downpour came. Sri Lanka lacked some discipline as they were forced to contend with a slippery ball after the break, but just as his frontliners appeared to be losing their way, a half-fit Angelo Mathews stepped into the breach to deliver two cheap overs towards the close.

Despite the loss, Samuels produced what was perhaps the best individual innings of the series, while his team collapsed around him. He had moved sagely to fifty before the rain break, then unshackled by the urgency of West Indies’ situation upon resumption, scored heavily on the offside as he hurtled to a ninth ODI ton. It was inherently a remarkable innings, but it was particularly sublime from a batsman who had spent the first four weeks of this tour in a funk.

As West Indies have found throughout the tour however, individual distinction usually can’t trump collective excellence. Lasith Malinga rifled through his variations from his first over, and Lakmal found zippy movement off the track. Malinga’s two victims fell in identical fashion – both fending bouncers tamely to point. Lakmal had Andre Fletcher lbw on the stroke of a first rain break that lasted over an hour, but didn’t cause a reduction of overs, then he bowled Darren Bravo with an indipper the batsman offered no shot to.

Samuels had moved smoothly to 50 off 51 balls after that first rain break, but came out intent on attacking after the second, major interruption. His first ball after the interruption, from Malinga, was clattered over midwicket for four. The next delivery was sliced over the third-man fence.

Samuels took a particular liking to Malinga in the second half of his innings, cracking the bowler through or over the point region for three consecutive fours in the 28th over, then continued to back away and aim blows to the square fence. The other bowlers were not so severely punished, but as Samuels was batting with Nos 10 and 11 in the last seven overs, singles into the outfield were routinely turned down.

West Indies’ only substantial partnership was his 55-run, eighth-wicket stand with Carlos Brathwaite, who made 18. Jason Holder, who hit 19, was the only other batsman to make it into double figures. Malinga, Lakmal, Chameera and Mendis all picked up two wickets apiece, and Mathews got a wicket for himself at the death.

West Indies’ bowlers were consistently threatening even with a wet-ball, but as the target was modest, Sri Lanka found themselves cruising. Kusal and Tillakaratne Dilshan bludgeoned a few early boundaries to give the chase some impetus. Dilshan was out cutting to Samuels at point, after having been dropped by the same fielder on the previous ball, but Kusal and Lahiru Thirimanne put on a 50-run stand together to settle the innings.

Thirimanne, Kusal and Dinesh Chandimal all departed within nine overs of each other, and yet, with Mathews at the crease, the chase never seemed in trouble. He struck up unhurried partnerships with Milinda Siriwardene and Shehan Jayasuriya to inch Sri Lanka towards victory. Mathews was unbeaten on 27 when the rains came again and the players went off the field for the third and final time.