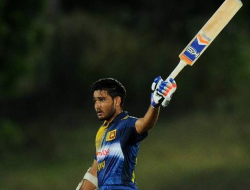 “I think we’re now playing a format we enjoy, in a place we’ve played it the best.” Thus spake West Indies captain Darren Sammy, fielding his first question since arriving on the island, where in 2012, his team had won the world title. As the visitors tumbled from defeat to defeat in the Tests and ODIs, you couldn’t help but think that the T20 series is where they would really push Sri Lanka. Perhaps it is no surprise that the shortest ODI – the 26-overs-a-side affair in Colombo – was the closest they came to notching up a victory on tour.

Bolstered now by the arrival of Sammy, and the likes of Dwayne Bravo and Kieron Pollard, West Indies are arguably even the stronger team on paper, while Sri Lanka continues to grapple with its exodus of experience. In the last series, against Pakistan, the hosts had trialled a few young players, and returned Chamara Kapugedara to the side after a long hiatus. Several of the young players have been selected again, which suggests the experimentation will continue, which in turn leaves Sri Lanka open to have their inexperience exposed, as it was against Pakistan.

One major change from that Pakistan series is Lasith Malinga’s resurgence. He was rifling through his variations in the ODI series, often taking early wickets, and usually bowling tightly at the finish, all at a greater pace than he had bowled with earlier in the year. There are questions about his suitability to spearhead this team, but there can be no doubts that he is the most pivotal cricketer in the XI. West Indies do have players who have shut him down in the past, however.

Sri Lanka remain the top-ranked T20 side in the world, but as Sammy has suggested, rankings mean much less in this format. The hosts need at least one victory to maintain their place, but West Indies will take the No. 1 ranking if they win 2-0.

Kusal Perera has been among Sri Lanka’s movers and shakers in a somewhat stagnant year, seasoning his brimming plateful of talent with good judgment and a little sense. He has begun regularly shaping ODI matches this year, but his T20 form has not yet caught fire in the same fashion – thanks in part to the infrequency with which T20 games are played. Having struck a 99 and a 50 in the ODIs, Kusal now has the opportunity to impose himself in the format for which his cricket seems created.

While Malinga has warmed up in the blue corner, Marlon Samuels has been heating up in the red. His 110 not out in the third ODI was the best innings of the series, and just like in that 2012 World T20 final, he has started to play Malinga particularly well. The carve through point was his go-to stroke in the one-dayers, but those brutal straight hits have begun to pepper the sightscreen as well.

Andre Russell is likely to be fit and available for selection. West Indies will miss the unwell Samuel Badree, but with his replacement Devendra Bishoo having had a decent CPL, they may feel confident enough to play him.

The Pallekele pitch used for Saturday’s ODI will be used again for this match. Sri Lanka had said the surface was slower than usual for the venue. Rain interruptions are likely.

In addition to the 2012 World T20 final, Sri Lanka and West Indies have also met twice in the semi-final of World T20 tournaments. Sri Lanka won both those matches. The 2012 final is the only T20 match Sri Lanka have lost to West Indies.

26 is Kusal Perera’s highest score in his most recent eight T20 innings.

“The last international T20 we played was back in January, in South Africa. After that we’ve played a few tournaments. Some of our guys are playing all over the world. We’ve put in some practice yesterday and today. Hopefully the rest of the squad that has been here should be acclimatised to the conditions. We’re looking to bring our experience and play a format that we enjoy.” West Indies captain Darren Sammy said his side are in good T20 nick, despite the long break between matches