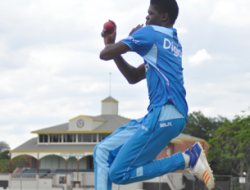 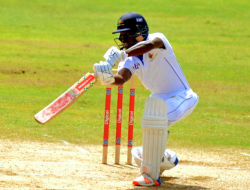 The trio were all involved in a slew of solid partnerships that propped up the unpredictable Scorpions’ batting, as they reached 315 for seven in their first innings at the close, after they chose to bat on the first day of their fourth-round match at Warner Park.
Palmer, freed of the burden of captaincy with the return of champion left-arm spinner Nikita Miller, was unbeaten on 78, and left-handers Fudadin and Campbell made 58 and 57 respectively, as the Scorpions used this well-known Caribbean batting paradise to restore confidence, after they took a hit in the previous match against Barbados Pride.

Hurricanes captain Rahkeem Cornwall opened the bowling with his off-spin and was the pick of his side’s weakened attack, taking 3-84 from 28 overs.
The Hurricanes had to draft Sheeno Berridge into their squad at the 11th hour to replace key fast bowler Gavin Tonge, who has not recovered from a hamstring injury.
Midway through the day, the Hurricanes were further hamstrung when Berridge too, had to leave the field with an injury.

Scorpions, undeterred, plundered the Hurricanes attack to their hearts’ delight before losing a cluster of wickets in the final session.
After a brief delay to the start, Campbell and fellow opener Garth Garvey used the first hour to give their side a solid base with a stand of 47 before Berridge made the breakthrough.

He trapped Garvey lbw for 23, bringing Fudadin to the crease and he ushered Campbell to his 50, as they consolidated for the Scorpions with a stand of 55.
Cornwall, however, had Campbell caught at slip to prompt lunch with the visitors on 102 for 2.
After the interval, Brandon King returned to the arena where he scored an epic double-hundred last season; but Jeremiah Louis made sure he cut him short before he unleashed. He bowled him for 19, leaving the Scorpions 129 for three.

Fudadin continued merrily to his 50 and shared 70 with Palmer before Devon Thomas, playing against his former franchise teammates, trapped the discarded Test batsman lbw in the final over before tea, which saw the Scorpions reach 199 for four.
After the break, the runs continued to flow for the Scorpions, but they continued to bleed wickets, as former United States captain Steven Taylor, Derval Green and Dennis Bulli fell inside the final hour.