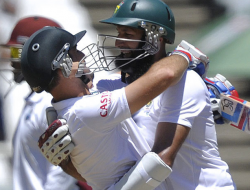 HAVING led the Malta Supreme Guyana to a semifinal spot where they lost to eventual champions Barbados in the inaugural West Indies Cricket Board/NAGICO Super50 tournament last year, Demerara Cricket Club all-rounder Christopher Barnwell has been entrusted with the captaincy role once again.

Yesterday after another intense training session in sweltering heat at the Guyana National Stadium, the Guyana Jaguars team was officially announced to the players, who applauded loudly when Barnwell was named captain.

It was Barnwell, who also stepped up to the captaincy plate for the first three rounds in the WICB Regional four-day tournament early last year, after the appointed skipper Leon Johnson picked up an injury and was unable to assume that role.

Loud cheers also went up for the Under-19 trio in first-class openers Tagenarine Chanderpaul and Shimron Hetmyer, and talented all-rounder Kemo Paul for their selection to the West Indies Youth team for the same tournament which bowls off in Trinidad and Tobago from January 15 to 25.

Even though he has played 15 first class matches for Guyana, including leading them in his last two – the shocking two-run loss to Barbados Pride, followed by an innings and 60-run victory over Trinidad and Tobago Red Force – Singh has never played a regional one-day game for Guyana at the senior level.

Also making a comeback to national duty is middle-order batsman Royston Crandon, who was overlooked after last year’s tournament, even as Jonathan Foo, the talented and hard-hitting middle-order batsman, gets a recall from the cricket wilderness after a four-year absence.

Barbados’ Raymond Reifer, Guyana Jaguars’ lone overseas player bought in the draft last October, is set to represent Guyana in this format for the first time, having played in the four WICB/Professional Cricket League Regional four-day matches to date, for which the Jaguars lead the points table with 57 points.

That aside, the other members of the team are openers Trevon Griffith, Rajendra Chandrika, the dependable Shivnarine Chanderpaul, leg-spinner Devendra Bishoo along with Anthony Bramble, Paul Wintz and Ronsford Beaton.

The squad and the other players from the training unit will assemble at the Everest Cricket Club ground at 09:00hrs today for another net session, while their first of two practice matches will be at the same venue from the same time tomorrow.

Eight teams will do battle for supremacy out of two groups, with the Jaguars being placed in Group ‘A’ alongside defending champions Barbados Pride, Windward Islands Volcanoes and CCC, all of whom they will meet in the preliminary round when the action bowls off, with the Volcanoes being their first at the picturesque Queen’s Park Oval on January 15.