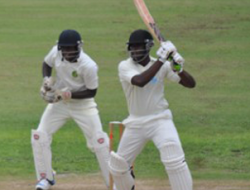 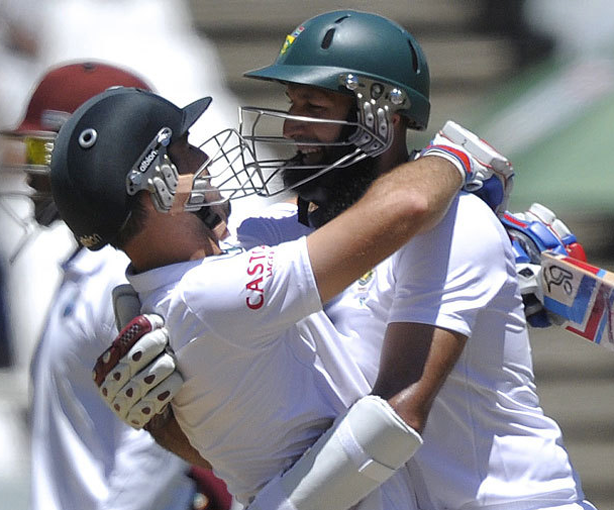 p style=”text-align: justify;”>South Africa duly completed an eight-wicket victory against West Indies on the fifth day, but initially at least it was not quite the stroll in the park that the scorecard suggests. West Indies stuck to their task with spirit and it required an exacting half-century from Dean Elgar to shepherd them to the win that brought a 2-0 win in the series.

South Africa, who had lost Alviro Petersen in the three overs on the fourth evening in what was later confirmed as the last innings of his international career, needed another 115. If they had been chasing 200, and West Indies – especially the left-arm spinner Sulieman Benn – had enjoyed a break or two, it could have been much closer. As it was, the last 30 or 40 runs came quickly and the series result left South Africa’s status as No. 1 Test side in the world undiminished.

The winning runs came 10 minutes before lunch when Marlon Samuels dropped short and Hashim Amla, the serenest of captains, hammered him through the covers. Elgar remained unbeaten on 60 to follow up his century in the second Test in Port Elizabeth.

There will be no let-up for West Indies in Tests following the World Cup. They will complete series against the top three in the world when they face England and Australia later in the year. They have competed well at times only to fall away under pressure with both bat and ball and with such a formidable task awaiting them it will be a challenge to hold body and soul together. The World Cup might be a welcome interlude.

Much of their challenge on the fifth morning rested with the long-suffering Benn. He has laboured on West Indies’ behalf throughout the series, but six wickets at 62 is not much of a reward. He has looked like one of life’s deserving. If he had been born in Cuba they would have built a statue of him to represent the value of strife. There was turn and bounce, especially against Elgar from the footholes. What there were not were wickets.

Benn did account for Faf du Plessis with the score 51, rearing one out of the rough to force a simple catch in the off side, with Jermaine Blackwood clinging on despite a gentle collision with Kraigg Braithwaite coming in from backward point. It was to be their only breakthrough.

Elgar was wary on the drive on this final-day surface, but the pull shot sustained him. It almost brought about his downfall, too, on 45, when he pulled Shannon Gabriel over midwicket where Brathwaite just failed to hold a running, one-handed chance.

If South Africa were intent on issuing an early message of intent, du Plessis pulled off a neat psychological ploy. When the sightscreen failed to turn around correctly, he just got on with the game. It was if he was saying “This won’t be a problem”. Soon afterwards, Elgar had the same opportunity, but his advert was red. You don’t try psychological ploys with a red ball against a red sightscreen – not even with only 115 needed.

West Indies mixed pace and spin: the serious intent of Jerome Taylor and the accompaniment of Benn, a towering figure of toil. They were right on the money. The mood was grave. Forty-five balls passed without a run until Taylor fired one in short and Elgar responded with an assertive front foot pull.

With Benn occasionally finding substantial turn and bounce, West Indies still clung to hopes of victory. Du Plessis needed 28 balls to get off the mark – a tight single, too. Taylor found Elgar’s edge but it fell in front of second slip. Twice, Jason Holder jagged one back at De Plessis only to concede four off the inside edge.

There is a turning point in such run chases when an innings awash with tension becomes an inevitable victory. Elgar’s long-on six against Benn, out of the footmarks, was a little early to be that moment; perhaps it was when Amla drove Gabriel through the covers and West Indies, their hopes fading, misfielded for the first time. West Indies failed with a review against Amla, beaten on the pull by Gabriel, but even then they knew in their hearts that it was just a matter of time.