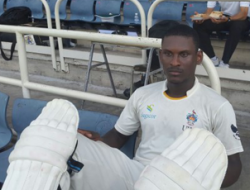 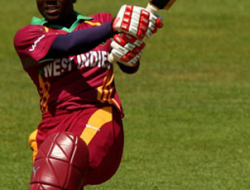 Look Sir Curtly Ambrose in the eye (you may need a ladder) and tell him the West Indies have no hope of beating Australia.

Tell him this first Test in Hobart will be over in two days – three, if Jason Holder’s men are lucky – and that more humiliation will follow in Melbourne and Sydney.

Tell him that David Warner and Steve Smith will feast on a modest bowling attack and that Australia’s greenest bowling line-up in years will embarrass the West Indies batsmen.

Tell him any of this and you’ll be on the wrong end of the fearsome glare that terrorised many a champion batsman throughout his celebrated career as one of the game’s very best fast bowlers.

“You as reporters have got to report what you see,” Ambrose said. “So I’ve learned over the years to, I won’t say ignore, but know what to take from the reports and what not to take. But we’re going to be focused. We’re not going to worry about what has been said about us not being a good team or not going to compete … At the end of the day when we perform and beat Australia, then the reporters will have to change their tune.

“We played against Australia not so long ago in the Caribbean and even though we lost 2-0 there were moments or periods when we had them on the back foot and had their backs against the wall. And we never really finished them off. So we believe we can compete and not only compete but we believe we can beat them and that’s our focus to beat Australia. Not just to compete but to win and, being the underdogs, sometimes it’s good to be that way.

They are fighting words and there are few who can deliver them with as much conviction as Ambrose, the giant quick who generally let the ball – and his eyes – do the talking on the field.

It’s a decade since Ambrose and Steve Waugh conducted one the most famous stare-offs in cricket’s history, the flint-eyed Australian stoic in the face of a blistering spell from Ambrose in Trinidad during the third Test in the 1995 battle for the Frank Worrell Trophy.

A decade may have passed since his man-of-the-match performance, but Ambrose’s gaze has lost none of its intensity. And now, as West Indies’ bowling consultant, he wants to use the predictions of impending doom to fire up his charges after an insipid showing in the tour match in Brisbane.

“Well first of all we’re not going to be distracted by those comments,” said Ambrose. “We’re here to do a job and we’re going to make a good job of it.

“Being here alone should be more than enough motivation for the players but having heard or read those comments should be added motivation for them to prove the critics [wrong], if you will. We are not really distracted. We’re focused and in light of what happened in the warm up game, we are confident that we can put up a good show against Australia.”

On its own, the West Indies’ 10-wicket loss to an inexperienced Cricket Australia XI side ahead of the series was a heavy blow. That they avoided an innings defeat thanks only to a stubborn partnership between Holder and Kemar Roach has given former players and current commentators ample fodder to question how the West Indies could take any confidence into the first Test. However, Ambrose pointed to frank discussions in the wake of the match as a potential turning point for the tourists.

“We had a meeting, we had a talk about it,” Ambrose said. “And I explained to the guys in no uncertain terms that that’s unacceptable and if we’re going to struggle against an Under-19 team how do we expect to compete against a strong Australian line-up?

“But we had a good meeting. Coach Phil Simmons called a meeting and we talked about a lot of things and I expect that, going forward, what’s gone already cannot be changed. So we’ve got to stay focused and move forward. I believe strongly that we’re going to put up a better show against Australia.”

Ambrose took up his consultancy role in February 2014 and admits it took time for his charges to “bind” to his concept for their approach to bowling. His status alone ensured the players listened – “Well, I am bigger than most of them so they have to,” he joked – and, while their lack of patience was initially the biggest stumbling block, Ambrose has witnessed an improvement in the control and consistency he believes is necessary to succeed in Australian conditions.

West Indies will look to Jerome Taylor, whom Ambrose dubs “the leader of the pack”, to replicate his best spells from the second Test of Australia’s 2-0 series victory in the Caribbean earlier this year. Taylor’s impressive first-innings haul of 6 for 47 off 25 overs in Kingston offered a spark of hope for renewal in his side’s heavy defeat and Ambrose is confident a Taylor-led attack has the ammunition to take 20 wickets, particularly if they can account for Warner and Smith.

“Of course they are in some good form at the moment,” said Ambrose. “They are two good batsmen as well, they are going to be key. If you can get them out pretty early for not too many runs and get into the middle as quick as possible, I believe the middle order for Australia is not that solid at the moment.

“Once we get them out early that is going to give us some leeway to get into the middle and really test them.”

Ambrose isn’t the only member of the 1995 side that defeated Australia in Port of Spain – but, ultimately, lost the series – trying to inspire the current crop of players. Richie Richardson, Courtney Walsh and Stuart Williams all have roles within the West Indies set-up.

But whether or not their defiant words can inspire a Test side ranked above only Zimbabwe and Bangladesh to victory over Australia remains to be seen. It will certainly take more than a withering glare. If West Indies manage to pull off an unexpected victory, they will need all the self-belief and passion of their predecessors.

“I’m going to do whatever I can, and the coaching staff of course, to put up a good show here,” said Ambrose. “And I believe, once the guys are focused, we’re going to do well.

“We’re going to do much better than you think.”