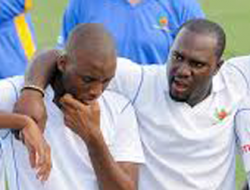 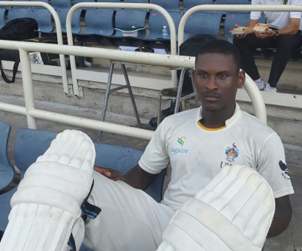 Chasing 149 for victory on the third and penultimate day of the match, the Scorpions, led by a maiden first-class half-century by new Captain Paul Palmer Jr, surpassed the target before scheduled close of play.

It is the Scorpions’ third-consecutive win of the season under Palmer Jr who stroked a patient unbeaten 51. The Hurricanes were suffering their fourth loss in as many outings in the 2015-16 campaign.

The Scorpions’ slow left-arm orthodox bowler Nikita Miller took 4-71 to end with figures of 8-124 in the match.

Leeward Island Hurricanes resumed yesterday from their overnight score of 112-3 and were dismissed for 228 in their second innings.

Earlier, Jeffers only mustered six runs to his overnight score of 55, edging to Damion Jacobs in the slip cordon off the bowling of Marquino Mindley in the opening two hours with the score at 127-4.

Peters dominated a 31-run fifth-wicket stand with Captain Steve Liburd (eight) to push the score along, but when Miller had the latter caught by Paul Palmer Jr, it quickly became 161-6 as leg-spinner Jacobs returned next over to remove first-innings hero and wicketkeeper/ batsman Jamar Hamilton (two) caught behind.

Rahkeem Cornwall joined Peters and the two took the visitors to the lunch interval at 180-6, but the former fell shortly after the break after edging to wicketkeeper Carlton Baugh Jr off Jacobs for 16.

The composed Peters found another useful partner in Jaques Taylor, as the pair added a further 38 runs for the eighth wicket to push the score up 220. However, Peters was run out by David Bernard Jr two runs after raising a half-century, and the innings was wrapped the following over when Miller had Gavin Tonge (five) caught at slip and Alzarri Joseph trapped in front for a duck.

Pacer Marquino Mindley (2-18) and leg-spinner Damion Jacobs (3-72) were the other wicket takers in the Scorpions bowling attack.

The Scorpions run chase started late in the evening with some aggressive stroke plays, but they lost the first wicket with 20 runs on the board as the quick-scoring John Campbell (15) went caught by Peters off the bowling of Rahkeem Cornwall.

Barbadian Kirk Edwards (four) who was drafted to the team once again failed to sparkle after playing a poor shot and was caught by Steve Liburd off Cornwall with the score at 44-2.

The in-form Andre McCarthy (13) joined Palmer Jr in adding 26 for the third wicket, but became Cornwall’s third victim of the evening after an attempted sweep shot came off the top edge and was taken by Jamar Hamilton behind the wicket.

The Scorpions were in a spot of bother at 84-5 when Jaques Taylor had Tamar Lambert (six) caught in the deep by Peters, and followed up with some brilliant work in the field to run out Carlton Baugh Jr (two) with a direct hit.

David Bernard Jr (36) and Palmer Jr then erased any doubts of a collapse as they posted 57 for the sixth wicket which laid the platform for victory, before Bernard Jr went caught off Cornwall. Miller (eight) came and was unfortunately run out by Joseph going for the winning run, but the damage was already done.