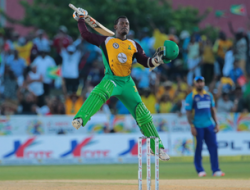 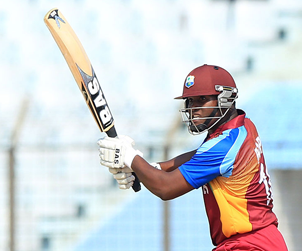 St Lucia Zouks batsman Gidron Pope made the most of a pair of lives early in his innings to hammer USA’s bowling attack, finishing with seven sixes in his 62 off 27 balls as a CPL Invitational XI defeated a USA XI by seven wickets with two balls to spare.

In a match reduced to 13 overs a side due to 75-minute lightning delay, USA XI won the toss and batted first with their innings anchored by opener Fahad Babar, who peppered the leg side boundary to top-score with 59 off 35 balls, in a knock that included seven fours and two sixes. Babar brought up his 50 off 28 balls in the 10th over and played a chanceless innings to help USA XI to a more-than-respectable 129 for 5.

Despite several other batsmen making starts, nobody else was able to get to 20 on a good batting deck. USA XI had been motoring along with Babar in control, taking the score to 65 for 1 after five overs, but mystery spinner Nikhil Dutta, of St Kitts & Nevis Patriots and Canada, took 3 for 16 in three overs including the wicket of Babar to rein USA XI back in.

In reply, Pope and Steven Taylor put on 99 for the first wicket, inside eight overs, for CPL XI, though USA XI’s sloppy fielding aided them greatly. A top edge from Pope, batting on 5, off Jessy Singh was spilled by Elmore Hutchinson at third man in the second over. Three balls later, with Pope on 9, the batsman was beaten in flight by Usman Rafiq’s offspin but wicketkeeper Akeem Dodson botched a regulation stumping.

Pope found his groove in the fourth over, clattering Singh for 17 runs including a four and six over the leg side and another maximum over long off. After scoring just 10 off his first eight balls, he made it to 50 in 22 balls in the seventh over when he punished Adil Bhatti for three sixes straight down the ground as part of a 25-run frame.

Ambidextrous spinner Prashanth Nair struck in the eighth over to remove Pope, having him caught at long off. He then used clever variations in flight to strike twice more, nabbing Taylor at short third man for 35 and Hamza Tariq for a second-ball stumping to finish with 3 for 24 in three overs. Alex Ross and Kyle Corbin took CPL XI over the line, finishing unbeaten on 16 and 12 respectively.

The full 30-man USA national squad will commence with three 50-over trial matches starting on Monday after which the squad will be trimmed down to a final 14 ahead of WCL Division Four in Los Angeles from October 29-November 5.