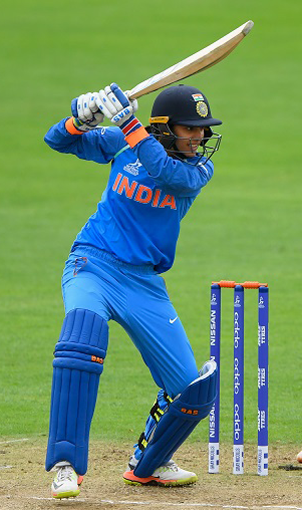 After India’s spin attack overwhelmed the West Indies batsmen with flight and guile, Smriti Mandhana made short work of the 184-run chase with a 108-ball 106. Her innings negated the stutter caused by the two early wickets lost in response to the pressure West Indies’ bowlers created with their fast, short-pitched bowling.

Mandhana carried on from where she left off against England, bettering her 72-ball 90 with a second ODI century and a first in the World Cup. She hit 13 fours and two sixes, punishing anything short. With Mithali Raj, she steered the larger part of the chase, adding 108 runs for the third wicket, before Raj, four short of her eighth consecutive fifty, holed out to mid-off.

Raj’s decision to bowl first failed to find much validation from her two frontline medium-pacers, Jhulan Goswami and Shikha Pandey. While Felicia Walters looked unruffled with Goswami’s off-stump line, Hayley Matthews took the attack to both opening bowlers, hitting them for a combined six fours in 27 balls.

On a moist pitch with a tinge of green, Raj turned to her spin spearhead Ekta Bisht, in the seventh over. The left-arm orthodox bowler struck with her first ball, forcing an edge off Walters with some flight outside off stump.

This happened one ball after Harmanpreet Kaur – who already sported a heavily strapped right palm – went off the field having injured her hand while diving at mid-off. Despite having to make up for Harmanpreet’s absence from the attack by bringing on Mona Meshram, who had last bowled in an ODI in 2013, India kept a tight leash on the scoring. Having taken 12.4 overs to add 40 for the second wicket with Stafanie Taylor, Matthews popped back a return catch to the offspinner Deepti Sharma.

Taylor was run out seven balls later, and Deandra Dottin, the scorer of a 38-ball hundred in T20Is, crawled to 7 off 47 balls before holing out to long-on, to complete a wretched batting day for the two stars playing their 100th ODI.

India, meanwhile, had Harmanpreet back on the field after being tended to by the physio, and she came on immediately. She snaffled Kyshona Knight in the 35th over to leave West Indies 91 for 6. Against the collective discipline of India’s spinners, led by Bisht and the legspinner Poonam Yadav, West Indies’ second, third, fourth, fifth and sixth-wicket partnerships together added only 62 in 169 balls.

The reintroduction of pace, in the form of Goswami, in the 36th over, gave West Indies some release. A slew of fielding errors further released the pressure the spinners had piled on. Bisht dropped two straightforward chances, letting off Anisa Mohammed on 0 and Afy Fletcher on 12, and the two went on to add 37 unbroken runs for the ninth wicket. Fletcher’s 36 not out and Shanel Daley’s 33 eventually lifted West Indies to 183.

Shamilia Connell began West Indies’ defence by peppering Punam Raut with a flurry of short deliveries, and she gloved the fifth ball of the innings – a well-directed bouncer – to keeper Merissa Aguilleira, failing to connect cleanly with a hook. Then Deepti Sharma, kept to 6 off her first 22 balls, succumbed to the pressure of all the dots, bowled trying to slog Taylor’s offspin in the eighth over.

Mandhana and Raj, however, ensured there would be no more flutters in India’s chase.

Having motored into the nineties, Mandhana suffered a few nerves: an awkward lofted drive on 93 was followed by a poorly executed pull next ball which went in the air and straight to deep midwicket, only for Knight to put her down. A few words between overs from her batting partner Meshram appeared to calm Mandhana down, and she duly reached her hundred off her 105th ball, doing so in the same manner that had brought up her fifty against England: making room and lofting the ball over cover for four.