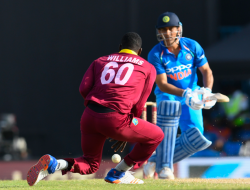 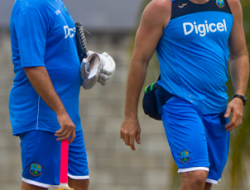 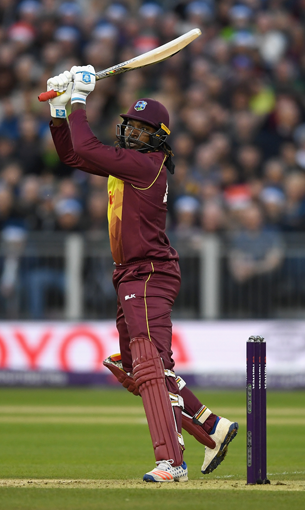 Chris Gayle set the agenda with a traditionally six-laden cameo, while his heir apparent, Evin Lewis, lived up to his lofty billing with 51 from 28 balls, as West Indies withstood a chilly autumnal evening, and a spirited England fightback with the ball, to seal victory by 21 runs in the one-off T20 at Chester-le-Street.

On a night that could not have been further removed from the balmy, barmy circumstances of their previous T20 encounter, in the World T20 final in Kolkata 18 months ago, West Indies choked England’s ambitions, first through the spin twins of Sunil Narine and Ashley Nurse, and then through a canny spell of pace-off-the-ball from Kieron Pollard, Kesrick Williams and Carlos Brathwaite, at precisely the moment when it seemed their own resolve was about to crack in the inhospitable conditions.

After losing the toss and being asked to bat first, West Indies served up the definitive innings of two halves. At the halfway mark they had rampaged to 106 for 1, with Gayle and Lewis crunching seven sixes between them in a freewheeling partnership, but they were restricted to 70 for 8 thereafter, as Liam Plunkett’s deck-hitting aggression, allied to another wily spell of legspin from Adil Rashid, looked to have kept their target well within manageable proportions.

With the weather beginning to deteriorate as quickly as the temperature, the contest seemed to have swung decisively in England’s favour – the first-ball dismissal of Jason Roy notwithstanding – when Alex Hales smashed 43 from 17 balls to launch their pursuit in a fusillade of boundaries. But when, in the sixth over, Hales missed a loose drive to be bowled by a gleeful Brathwaite, England’s usually power-packed middle order could produce no adequate substitute for his sublime ball-striking.

Joe Root, often so adept at working the gaps to allow his team-mates to clear the ropes, this time turned in a stodgy innings of 17 from 19 balls that came to an end with a low catch at short cover as Nurse struck with his third delivery. And spin continued to apply a tourniquet to England’s run-rate, as Eoin Morgan ducked and dived against Narine to no avail. After three consecutive dot-balls, Morgan reversed his hands for flick through backward point, but picked out the fielder to depart for 2 – his seventh consecutive single-figure score in all T20 innings.

The conditions were never easy for West Indies’ fielders – the cold and damp combined to create a funereal over-rate as well as regular protests about the slippery out-field. But with the umpires adamant that the show must go on – and the hardy Durham crowd certainly never lost the faith in that regard – West Indies found a second wind as England’s innings dribbled through the middle overs.

If anyone was going to reignite the run-chase, it was Jos Buttler, whose mere presence was a reminder that nothing could be taken for granted. But with little pace to work with, he was unable to risk his habitual dinks over the keeper’s head for fear of holing out behind square, and he had been limited to two boundaries in a 27-ball stay when a Williams short ball induced a spliced pull to Rovman Powell at deep midwicket.

Williams – who had borne the brunt of Hales’ earlier onslaught, when pace on the ball had equalled pace off the bat – then made it two in the over as a skittish Rashid gloved an attempted ramp to the keeper. Narine returned for his final over, that included the stumping off David Willey for 1, before Jonny Bairstow – England’s final, final hope – capped a collapse of 4 for 11 in 14 balls when he shovelled a Brathwaite slower ball to backward square leg.

Fittingly, it was the captain Brathwaite – remember that name? – who put the seal on the victory as Plunkett missed a slog across the line with three balls of the innings remaining. England were all out for 155, done in by some canny bowling and a classy outfit who proved, as if it needed reiterating, that their World T20 triumph was no fluke.

In the final analysis, however, it was West Indies’ flying start with the bat that proved the decisive difference between the sides. And fittingly, given that what little hype in the build-up to this contest had centred around the master and the apprentice at the top of West Indies’ order, it was Gayle and Lewis who shared top billing.

Gayle, who got off the mark first-ball with an edged four through third man, soaked up a handful of sighters with that exaggerated caution that has so often been a feature of his game, before crunching from first gear to overdrive in the waft of a bat. His seventh ball, from Willey, was spanked over midwicket to bring up the 100th six of his T20 international career, and he celebrated that landmark in emphatic style one ball later, an arcing flog down the ground and over the sightscreen as Willey was once again punished for feeding Gayle’s strengths on a full length outside off.

At the other end, Lewis – whose last act in West Indies’ colours had been a matchwinning 125 not out from 62 balls against India – slipstreamed his senior partner with poise and maturity. He avoided falling for the ego-trap that had done for Gayle (and his predecessor as opener, Johnson Charles) in the World T20 final, when Root was tossed the ball for the second over of the Powerplay for tidy over of darting offbreaks, and instead saved his change-up for the introduction of Tom Curran, whom he cracked for four, six, four, six from the first four balls he faced.

West Indies finished the Powerplay on a daunting 72 for 0, but England – to their credit – found a means to claw back into the contest. The catalyst came with the introduction of Plunkett in the seventh over, as Gayle was pushed onto the back foot by a lifter outside off, and was slow to set off as Roy’s shy from backward point was sharply gathered by the bowler to pull off a tight run-out.

Lewis’s half-century then came to an end as he smashed a Plunkett slower ball into the midriff of Root at mid-off, and when Plunkett followed up with two more major scalps – Marlon Samuels, caught at midwicket off a cramped pull for 10, and Pollard – expertly plucked at fine leg by a stretching Curran – England had found a means to restore their foothold in the game.

Rashid, who’d been teasing out a tidy line and length in his mid-innings holding role, then dragged one down for Chadwick Walton to flog a top-edged pull out to Willey at deep midwicket, then did for Brathwaite and Narine in quick succession as an untimely rain interruption – with seven balls remaining – further disrupted West Indies’ flow. But, just as had been the case on that famous night in Kolkata, West Indies would not be denied. The prize on this occasion was rather more low-key, but with their big names back on parade after a low-key Test leg of their tour, it was a notable return to the colours nonetheless.