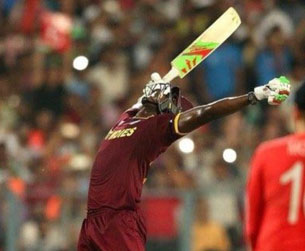 ST JOHN’S, Antigua – West Indies all-rounder Carlos Brathwaite has admitted that the weight of expectations following a memorable World Twenty20 final against England has in some ways become a blight on his career.

Brathwaite famously slammed four straight sixes off unfortunate bowler Ben Stokes as the West Indies claimed an unlikely win over England in last year’s World T20 final.  Since then, however, it seems to have been a complete reversal of fortunes as while Stokes has gone on to be selected as the most expensive foreign signing in the Indian Premier League (IPL), Brathwaite has struggled to make an impression.  The 28-year-old Barbadian has scored just 423 runs at an average of 12, with a solitary half-century since the World Twenty20 final.

“Unfortunately, it went downhill quickly. Because of what happened that night, people expected things and I guess, for a brief period, I expected them as well. It became a negative,” Brathwaite told reporters ahead of the team’s upcoming three series ODIs against England, where he will once again come face to face with Stokes.

“Obviously, four sixes shot me to prominence, but people forget that my Test average is 45 and I have three Test 50s in three matches,” the Windies T20 captain added.

“I’m in a better space now than when I was at the end of last year.”