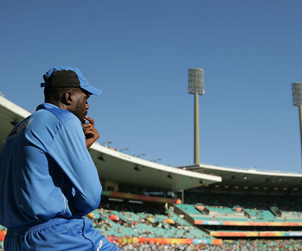 International appearances: 475. International wickets: 1219. Knighthoods: Two. As top-tables go, the one in the Norwood Room at the Basin Reserve, a ground studded with cricket history, would take some beating.

Sir Richard Hadlee and Sir Curtly Ambrose, side-by-side, as World Cup ambassadors although with the latter still having a very hands-on role with how this tournament will play out as West Indies’ bowling coach.

For nearly half an hour they chatted away, occasionally to each other, while to their left stood the modern World Cup trophy. Amazingly, in many ways, given the pedigree of the two players, neither of them have ever been World Cup winners.

The closest Hadlee came was in 1979 when New Zealand lost the semi-final against England, at Old Trafford, by nine runs. For Ambrose, there was the galling semi-final defeat to Australia, in Mohali, in 1996 when West Indies lost 8 for 37 having seemingly had the match sown up. Ambrose was run out off what would become the penultimate ball of the match with his long-time sparring partner, Courtney Walsh, bowled next delivery.

This, though, was an occasion for more light-hearted reminiscing. Yes, there were questions about Saturday’s quarter-final, Hadlee reiterated how much he rates the Tim Southee-Trent Boult pairing while Ambrose backed Jason Holder and Jerome Taylor to be a threat. He also said how he feared for bowlers if the game did not rebalance itself. But it was the stories that made it a special 30 minutes.

With all due respect to Hadlee, he has been heard from a lot over the last few weeks and months. This was an occasion for Ambrose. Throughout his playing career, he was followed by the motto, “Curtly talk to no man.” Thankfully, that is now very different.

Given it was Wellington, his memories started at the Basin, from the 1995 Test when New Zealand were destroyed by an innings and 322 runs. It was Ambrose’s only Test on the ground and the second innings was one of only 11 times, out of 179 innings, when he did not open the bowling.

“I had the choice of ends even though my good friend Courtney was the captain – of course I’ll choose the one with the wind,” he recalled. “We bowled New Zealand out in their first innings and enforced the follow-on and since captain Walsh was bowling so well we decided he should bowl with the wind, but as I walked out I realised there was no way I could bowl into the breeze so ended up bowling first change. I can’t believe that’s 20 years ago.”

Taking Ambrose further back to the 1992 World Cup, he was asked whether he remembered when Mark Greatbatch was brazen enough to put him into the Eden Park stands.

“There are some things a fast bowler doesn’t forget,” Ambrose said with a wide grin “I remember clearly that game. He came down the track to the late, great Malcolm Marshall and hit him for six I think.

“He did the very same against me as well and I remember saying to him, politely, that it’s 22 yards, don’t try and make it 18. That’s all I said. He got the idea so he stayed with 22.”

New Zealand won, by five wickets, Greatbatch eventually out for one his trend-setting opening sorties of 63 off 77 balls. It was a rare occasion for Ambrose not to come out on top when a batsman riled him.

One of the most famous occasions when a batsman should have known better was January 1993 at the SCG when Dean Jones asked Ambrose to remove his white wristbands. Ambrose, who already had two wickets, did remove the offending items…and also a few more Australian batsmen.

“Dean Jones tried that, and it backfired. He didn’t try it again. I was hoping he did. You know, you have those moments. You’re bowling well within yourself and then something triggers you. It doesn’t have to be something that the batsman says. It could be anything and suddenly you get that extra burst of energy and start to bowl a lot quicker.

“My advice to you as batsmen – don’t rattle a fast bowler.”

Ambrose was legendary, though, for not sledging. The stare was enough. The stare to Michael Atherton. To Graeme Hick. To Steve Waugh. To name just a few. And in the middle few were silly enough to try and talk back.

“I don’t think that sledging is a part of cricket. I don’t believe in it. I believe that if you’re a good enough player, you should let the bat or ball do the talking for you if you have resort to sledging to get the positive result, I’m not for that

“Throughout my career I’ve never really been sledged. At six foot seven, bowling 85-90 miles an hour it’s not the best thing to do. But I’ve heard other guys being sledged, especially the batsmen, and they would come to myself and the other quicks and make a complaint. Ask us to sort them out.”

And often that would only end one way.