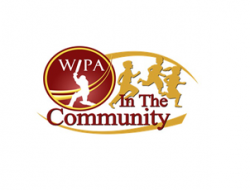 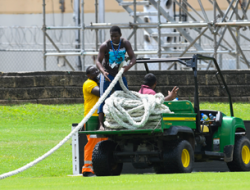 Any team will be a tad disappointed with losing two wickets in the first session after choosing to bat on a slow track, but such has been the state of the West Indies batting that they might take this. Only once in the series have they lost their third wicket after reaching three figures. Kraigg Brathwaite, who has shown the willingness to buckle down, did that job, but he will be disappointed they lost two wickets especially after he and Leon Johnson had seen off the first spells of the opening bowlers.

West Indies will be all the more disappointed because the pitch was really slow after having spent a lot of time under covers because of rain leading up to the Test. It had left the outfield wet enough to delay the start of the Test by half an hour. Bhuvneshwar Kumar, who had cracked open the last Test for India, wasted little time, though, in creating opportunities. In his first four overs, he hit the outside edge of Brathwaite’s bat four times: twice the ball fell short, once it travelled in the gap in the slip cordon, and once Virat Kohli dropped it at second slip, seeming to suggest he expected third slip KL Rahul to go for it.

That wasn’t the first disfavour he had done his bowlers: he had decided to play just the four bowlers so that both Cheteshwar Pujara and Rohit Sharma could be included. Also he dropped Shikhar Dhawan for M Vijay after an uncertain batting line-up had been reduced to 126 for 5 in the previous Test.

After seeing off Bhuvneshwar and Mohammed Shami for a partnership of 31 runs, Johnson fell to the first ball bowled by Ishant Sharma. This was his second straight dismissal to short leg, and again straight off the bat. Ishant got it just high enough into the ribs, but Johnson could have left it alone.

The second wicket didn’t take so much co-operation from the batsman. After Darren Bravo had picked R Ashwin for a two and a four at his home ground, the next ball was just a bit shorter, creating the distance between the pitch of the ball and the bat. Then it had enough time to turn from middle and leg and past the outside edge to hit the top of off stump. That in the first session of a Test is excellent for a spinner.

Brathwaite, though, remained solid and in partnership with Marlon Samuels took West Indies to within 15 minutes of early lunch when rain brought them early relief for them.