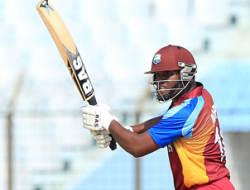 Allrounder Kevon Cooper is in Florida with the Trinbago Knight Riders after having his work visa for America sorted and he will take his usual place on the team for their clash against the St. Kitts/Nevis Patriots at the Central Broward Regional Park in Fort Lauderdale from 7pm tonight.

The TKR has had a good run on the road after a dismal showing at home and they will be looking to end the league phase in Fort Lauderdale strongly with a win tonight and again on Sunday against the same opposition.

Dwayne Bravo’s men will be buoyed by the fact that they defeated an in form St. Lucia Zouks in their backyards on Tuesday night. After looking out of the contest at 63/5 they were indebted to an unbeaten 73 from Umar Akmal that pushed them to 168/7 for an eventual three-wicket victory.

Yesterday, the team took it light after flying in the night before from St. Lucia. The regular starters on the TKR team took it light, staying around the Marriott hotel and doing some sightseeing and shopping. The players who have not been getting regular games were at the Central Broward Park in a training session with coach Simon Helmot.

As it stands, TKR is currently on eight points from eight matches and in third position. At the end of their final preliminary round game on Sunday they would hope to be in the top four, heading to St. Kitts for the play-offs.

At this stage of the tournament, their eyes will also be on other matches. Last night was a key clash at Broward between the Guyana Amazon Warriors and the Barbados Tridents. Tridents have seven points, so if they lose to Guyana, they would have only one match remaining that can take them to only nine points. This would leave the TKR needing just a win tonight to move into the play-offs. Sunday’s game will then be of significance only to determine their position in the play-offs.

Yesterday, the Patriots full squad was out in the numbers, taking in a training session in temperatures ranging around 35 degrees celsius. They can no longer qualify for the play-offs as they have just two points from eight matches, but there is a lot at stake in terms of personal performances and players looking to attract further work in T20 leagues.

Expected to battle against the TKR tonight will be T&T’s trio of Samuel Badree, Lendl Simmons and Evin Lewis.

The pitch is expected to play true, with the ball coming on and not stopping as has been the case during domestic tournaments here like the US Open T20 tournament.

Checks with the ticket office showed that the ground is half sold for tonight’s clash, with tomorrow and Sunday expected to be packed to full capacity which is 13,000 fans.