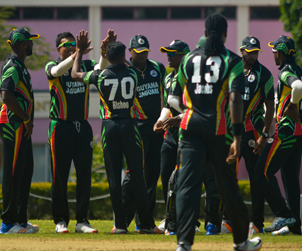 FOLLOWING the abrupt end to their NAGICO Super50 campaign, Assistant Coach and

Manager of the Guyana Jaguars, Rayon Griffith, admitted that the Jaguars will need to regroup and refocus before the resumption of the Professional Cricket League’s (PCL), Regional four-day tournament.

The PCL will resume on March 10.
The Jaguars crashed out from the Super50 tournament on Thursday last, following their final preliminary game.
“Definitely we are disappointed not to progress further because every time we go out there, we are representing 700,000 or more people, but having said that its cricket… sometimes you win sometimes you lose, so all we can focus now on is to regroup and refocus ahead of the four-day tournament, which resume next month,” Griffith, a former Guyana pacer said.

He indicated that the many dropped catches, and the top-order batting failure, are the two main contributing factors to Guyana’s dismal performances during the tournament.
“We had some good times, we won four and lost four, but the dropped catches cost us badly. If we had taken those opportunities we could have restricted teams for under 250 runs, which will then put our bowlers in a better position.”
The 38 year-old Griffith added “On the batting part we had a top-order problem. We just could not have provided that start when we needed it the most, and that also cost us”.
Further Griffith feels that the lack of self-belief and the time of execution would have played a role for some of the batsmen.

“I feel some of the batsmen had need a bit more ‘belly’, the lack of self-belief and the time of execution were simple not their…as coaches we can do so much in preparing them, but they are big men, and they need to take up the responsibility,” Griffith revealed.
This is the first time since 2013 that Guyana has not made it to the ‘final four’ in this format. However, Griffith, who is also the Chairman of the senior selection panel, pointed out that there were few positives from the disappointing performance.

“Raymon (Reifer) had a very good tournament with both bat and ball. Shiv (Chanderpaul) has displayed his experience…in fact he was the only batsman to score a hundred for us, Leon Johnson as well was consistent in the middle, young Hetymer made 94 in the last game, so there were some positives,” Griffith opined.
The Jaguars finished with 18 points.